Gwydir Shire Council staff will get to work on a plan to connect around 80 homes north of the Gwydir River to Bingara’s sewerage system, after Northern Tablelands MP Adam Marshall last Friday announced a $231,000 grant from the State Government. 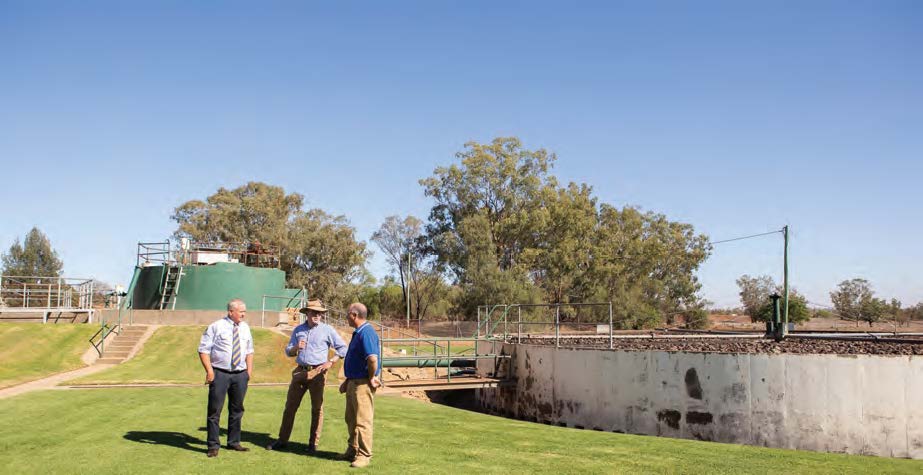 Mr Marshall said council had been working for some time to secure the funds needed to plan an extension of Bingara’s sewer system and upgrade the sewerage treatment plant.

“Many homes in north and east Bingara utilise in-ground septic tanks and effluent absorption trenches and are not connected to the town system,” Mr Marshall said.

“Unfortunately several of the properties which have these systems are located upstream of Bingara’s water supply extraction point in the Gwydir River and pose a health risk should effluent leak into the waterway. There is a real risk that at some stage in the future that without doing anything there could be some seepage from those tanks into the Gwydir River. This is really going to safeguard the river.

“Bingara’s Sewerage Plant was constructed in the 1970s and has served the community well over the last 40 years,” he said.

The funding allows council to do all the technical work, looking at where pipes and pumps need to go and prepare a design for further necessary works.

“Council will use this planning money to look at updating the facility by addressing concrete corrosion and other minor issues at the plant. We will provide additional funding to do the construction.
“Despite the drought, Bingara is a vibrant community which relies heavily on tourism, which is largely based around the banks of the Gwydir River.

“As more people come to town, the government will work with council to ensure the infrastructure is in place to handle increased pressure on services like water and sewerage and I congratulate Gwydir Shire Council for its efforts to proactively address this issue, before it becomes a major problem,” said Mr Marshall.

Mayor John Coulton is encouraged by the efforts of the Gwydir Shire Councillors to facilitate their hopes for the community.

“When Councillor Dixon was elected to Council her aim was to put sewerage on that side of the river. She has pushed that, and it looks like it’s going to come to fruition,” he said.

“Thanks to the State Government because this is something our Council can’t achieve on its own. We needed help, and to their credit they’ve come forward and supported us.”
The next stage will take around twelve months. Any further construction will take an additional twelve months to two years.