For over 18 months, a steady convoy of hay, grain, hampers and gifts have made their way from the small town of Bangalow in the Northern Rivers to Bingara, providing vital supplies for farmers facing the worst drought on record. Earlier this year Bangalow supported the children of Bingara Central School by subsidising the annual school camp, and in the coming weeks will be distributing Christmas hampers to every child attending the school in the hopes of making their festive season a little brighter. 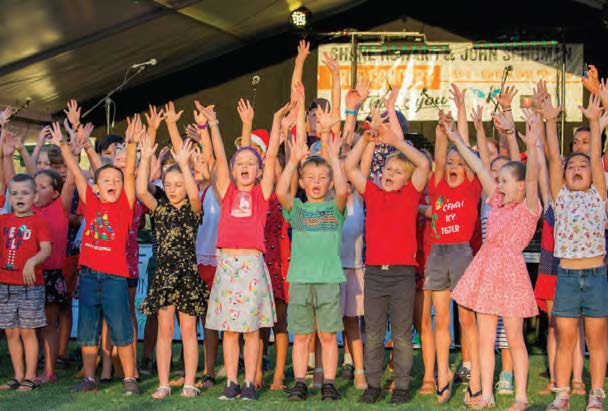 In their latest show of support, Bangalow have joined forces with Gwydir Shire Council to coordinate the annual Christmas Carnival. This time instead of hampers, the convoy will comprise of sound technicians, musicians, singers and performers, all ready to put on a show.

Bangalow woman Lisa Laing, is one of the women behind these incredible acts of kindness. Lisa wanted to bring some joy to the town after two terrible years of drought conditions. “When Bangalow first came to Bingara’s aid over a year and a half ago it was the worst drought the district had seen for decades. It was impossible to believe the conditions could get any worse. Eighteen months on and with little rain to report, the effects are beyond belief,” said Ms Laing.

“We want to show Bingara that we are are still here, and still willing to lend a hand”. Lisa has called in favours from friends and family across Australia to put together a show of talented performers, which includes Clayton Crosby, Dan Murphy, Susie Jay and Joe Ace, Jayne Henry, Bingara Central School and the Bingara Preschool.

Fans of TV show Australia’s Got Talent will remember 2018 series finalists Susie Jay and Joe Ace who and their energetic performance of You’re The One That I Want from the hit movie ‘Grease’. Susie and Joe will bring the same act to the concert on Saturday night.

Dan Murphy is a dynamic performer who has an extensive following, both in Australia and America. Dan launched his first album, Country Boy, to critical acclaim and achieved chart success nationwide. Dan took his songs to Nashville and performed during the CMA Fest for six consecutive years.

MC for the evening Jayne Henry has graced the stage professionally for over 25 years and has been the support for many successful artists including Kasey Chambers, Grace Knight, Adam Brand, The Waifs, Phil Emmanuel, Mental As Anything. Jayne will intersperse emcee duties with a number musical performances, including hit songs and Christmas carols.

Complementing the concert will be a range of food and market stalls, kid’s entertainment, a visit from Santa and a family holiday on the coast to be won. The event is free and will take place at the Gwydir Oval this Saturday 30th November from 6pm with the concert kicking off at 7pm.