Bingara Angler’s Club has had a roller-coaster ride to start 2020. Last week’s recognition as Environmental Citizen of the Year for the exceptional work they have completed in creating a sustainable river system has been countered by the impact of recent rain.

January, however, was a turbulent month for the club. Whilst much of the region welcomed the downfall received at the end of January, the substantial and fast falls down stream of Bingara meant a flush into the Gwydir river that has had devastating consequences. A large volume of water came from Halls Creek and met the river at The Junction bringing with it considerable silt from the years of drought. This created issues with the volume of oxygen in the water and resulted in the death of Murray Cod. 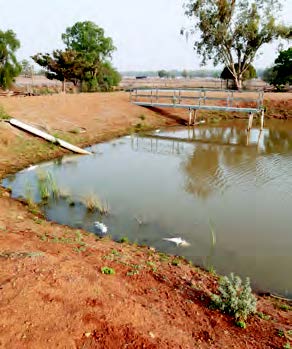 Murray Cod is the largest freshwater fish in Australia and the iconic species is now listed as a vulnerable species by the Commonwealth Government under the Environment Protection and Biodiversity Conservation Act 1999.

Beyond the Gwydir River the Bingara Hatchery has also suffered. Extreme heat throughout January had a devastating effect on the stock in the breeding pools at the hatchery. Nine consecutive days with temperatures of over 40 degrees on resulted in the death of the ten breeding pairs of Murray Cod; stock which was captured to secure the future of a healthy fish population in the Gwydir River into the future.

Bingara Angler’s Club President, Stuart Lanagan spoke to The Gwydir News about what has happened at the hatchery. “It will be a long road back. We’re hoping to get a further grant to seal a dam that’s been leaking but we will need to catch ten further breeding pairs to be matched up in our tanks. “These fish are then tagged and registered. They have DNA taken and that is all recorded with the DPI before they can be bred. They will be left to mate naturally for 12 months then spawn naturally.

“It’s far from over,” says Stuart Lanagan. “The last time the Horton River was dry was 1902. So it’s taken 100 years to get back to where it was. To get to fish back to one metre long; well I won’t be here to see it.”

Ongoing dry conditions have brought pelicans to the area in greater numbers than have been seen previously. This has also caused problems with the hatchery’s Yellow- Belly. Stock has been completely decimated by the hungry birds. While problems with pelicans have been an issue in the past Mr Lanagan says it has never been so bad. “Every year when it does get dry pelicans do come inland and they raid all the farm dams and the rivers too.”