Justin and Lorroi Kirkby from Gravesend, along with the North West Local Land Services were both awarded for their work at the 2019 State and Territory Landcare Awards recently. Justin and Lorroi, members of Northern Slopes Landcare Association and the Green Triangle Farming Group, are the Grand Champions of this year’s Australian Government Excellence in Landcare Farming Award for their work in Regenerative Agriculture at their Gravesend enterprise – Amarula Dorpers.

Justin and Lorroi are thrilled to be recognised for their regenerative work, which began after attending their first soil field day in 2006. “Sustainability was the word, but ultimately who wants to sustain a degraded landscape? We needed to go further,” said Lorroi. “It is now all about the regeneration and biology of the soil, healthy plants, and increasing groundcover to effectively use all the rain that falls on their land.”

The couple have been planting trees and saltbush to provide shade, shelter and wildlife corridors linking remnant native trees and vegetation together to produce places for wildlife, insects and birds to work as one. As a result, healthy animals require less animal husbandry such as drenching and treatments for diseases as the pastures are more nutritious and the whole ecosystem is working cohesively.

“A balanced business is a profitable business and it starts with understanding the dynamics of your livestock business, overall production system and how this fits into the environment and management of our natural resources,” said Justin. “You can be highly productive without having to keep increasing stocking rate or production costs and overusing limited natural resources.” 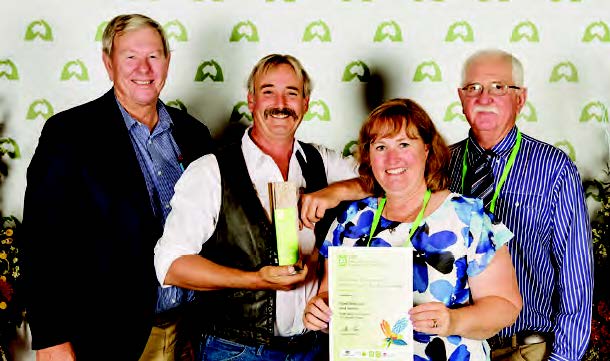 Shelley McDouall from Northern Slopes Landcare has congratulated the Kirkby’s on their success and commends the couple on their generosity by sharing what they have learnt with others. “The Kirkby’s have held many field days on their property and are keen to help other landholders along their journey to practice change,” said Shelley. The drought is the biggest hurdle the couple is facing and as they are continually learning on their journey, this will lead to their property to be more drought tolerant in the future.

“As hard as the drought has been, it has been pivotal in realising that it isn’t about being the biggest or the best or producing the most – it is about family and looking after the land.  It is profit not production; the Kirkbys have realised that they can be profitable without degrading our natural resources.”

Peter Dawson, the regional weed coordinator for NW LLS and Jo-Anna Skewes, Cacti Control Coordinator, have been working closely with landholders to better understand and identify challenges and barriers to control cacti in the North West region and working with the community to achieve control. This program has led to a crossborder working group who held five forums across the core infested area of southern Queensland and north west NSW that enabled over 117 community members to ask questions, seek advice and support around how to achieve control over Harrisia cactus in their community or property. 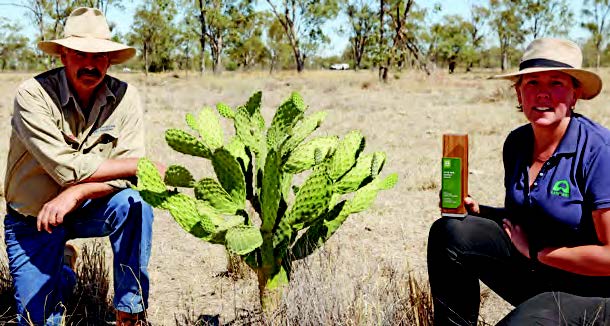 “Through this education and awareness program and the foreseeable impacts of Hudson Pear and Harrisia incursions, there has been increased control awareness and education throughout the region,” said Peter. The program has also worked closely with the NSW Department of Primary Industries to promote the use of biological controls in the core infestation areas is proving to be invaluable, as the new biological control agent, cochineal insect, is able to penetrate the core infestations where humans cannot.

Tourists are another vital link in the chain, and the partnership is currently working on brochures to educate the tourists about Hudson pear and Harissia cactus and ways to avoid being the instruments of spreading these weeds. “Tourists are being encouraged to check their tyres before leaving the area to ensure that no cladodes have attached to their vehicles which could spread the weed to their next camping ground,” said Jo-Anna.

CEO of Landcare NSW, Dr Adrian Zammit, said the awards were a chance for each Landcare region and group to share their stories and successes from across the state to their fellow Landcarers. “The NSW Landcare Awards highlight the incredible work that our Landcare community do. On behalf of the Landcare NSW community, I congratulate Justin and Lorroi Kirkby and the North West Local Land Services for winning these awards.

“Landcare is about communities working together to create positive outcomes for the environment and the agricultural landscapes across NSW. It has never been more important that we continue to support and recognise the dedication and commitment of our Landcarers and recognise their tremendous efforts,” said Dr Zammit.

Grand Champions of the NSW National Award categories like Justin and Lorroi will now go on to represent the whole NSW Landcare Community at the 2020 National Landcare Awards in Sydney.