Bob lived his entire working life out at Keera, where, under the tutelage of grandfather Abe and father Abbey he would learn the skills of being both a cattleman and horseman, and put him in great stead to raise and produce Angus for show and for sale.

His formal schooling involved riding his pony four kilometres each day to Gouron Creek to meet the bus which would take him into Bingara School, and later he completed his National Service at Singleton, which greatly benefited him. 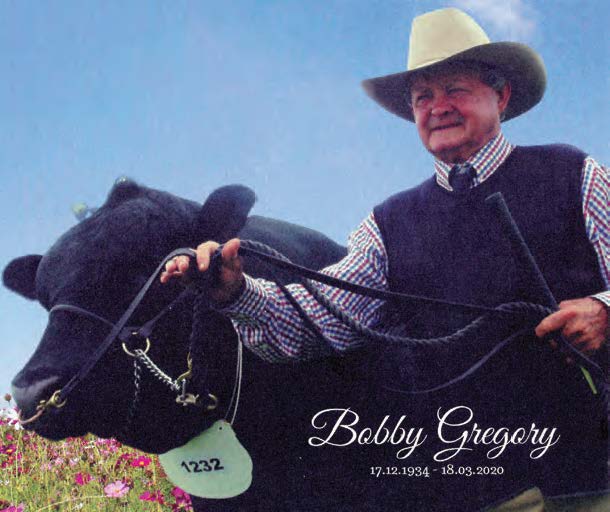 As a competent horseman, Bob was tasked with breaking in many yearling race horses that would go on to glory: White Lightning that won the Widden Cup with Barrie Smith on board, Macareena who won in Sydney and Walcha, Bonny Romance winning at Grafton, and many others.

Bob competed in local shows in both campdrafting and jumping, with great success.

Bob married Yvonne on 10 December 1964, a wonderful woman and support to Bob throughout both his working life and retirement, and had their son Scott who would bless them with five grandchildren.

He took over Booroomooka after his father’s retirement in 1967, working with the Munro family as his father had done before him.

In 2008, Bob was the recipient of the Service Recognition Award from the Angus Society.

In 2016, he was honoured as a Show Legend by the Royal Agricultural Society, for lifelong love of showing the cattle he produced.

Bob was nationally recognised as a great leader of show cattle, winning Grand Champion Parader at the Sydney no fewer than 17 times, including during World War II, a time when the main parade ground was taken over with Army training and the cattle show done at the Wool Stores at Pyrmont, where ring was made out of stacked wool bales.

Hugh Munro of Booroomooka said of Bob: “Bob will be remembered for his loyalty, competence with cattle, his education of youth in the industry, his dedication to his family and the causes he pursued, and his humour.

“He had the respect of everyone.”