Grand final footy was at its absolute best when the Bingara Under 10’s took the field against Glenn Innes last Saturday at Moree’s Boughton Oval.

12 young, brave Bingara warriors took the field against a much bigger, 20+ Glenn Innes team, carrying the hopes of not only their club but the entire community. To say the boys were nervous would be an understatement, their emotions running close to the surface.

Glenn Innes were determined not to see a re-run of the semi finals where they were narrowly defeated by Bingara and came out ready to dominate play. 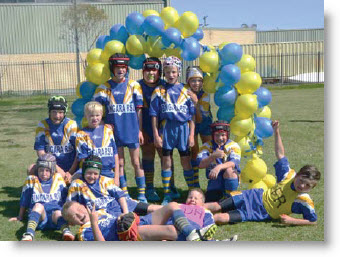 Our boys moved the ball well with Will Kelly, Steven Todd and Brock Galvin making some great, weaving runs through the centre of the field.

Our forwards, Darcy Priest, Douglas Grant and Cody Gillogly ran the ball hard but Glenn Innes seemed ready for all our plays.

Finally, Bingara shifted the ball out to Harry Newnham who had enough speed to cross the line for the first points of the game. Steven Todd took the kick for conversion and nailed it, adding 2 points.

Glenn Innes hit back hard but our defence was strong. Great tackling by Ben Perrin, Brody Michell and Jayden Sullivan kept Glenn Innes back time and again. However, Glenn Innes kept coming and crossed the line for a try. Their kick for conversion was unsuccessful and Bingara held the lead 6 – 4.

Our brave Bingara players tried and tried to get some good field position and closer to the try line but Glenn Innes shut down our players at each attempt, their defence was impeccable. Steven Todd took on kicking responsibilities and was able to get some good kicks away but Glenn Innes wrapped up the ball well. They came back in attack and our boys were overwhelmed by the sheer strength of their runs. Glenn Innes crossed the line for another successful try which was then converted.

After the break, Bingara’s confidence was waning and the boys struggled with handling errors and Glenn Innes capitalised on this, crossing the line for an easy try and a successful conversion, leading the game 16 – 6.

Our defence remained strong in the second half, Marshall Bond and Digby Munro not bothered by the size difference, tackling some much bigger players. Jayden Sullivan impressed with some good runs as well as Darcy Preist who barrelled through the defence, set up a better field position. Bingara took advantage of this good field position and a great pass saw Cody Gillogly smash through the Glenn Innes line, dragging half the team with him and eventually barrel over the line for the try of the day.

As the crowd held their breath, Digby Munro was cool under the pressure and kicked the ball for a great conversion. Bingara was closing the gap 12 – 16. This was just the shot in the arm we needed and our plays became more confident and our boys were back in the game.

Glenn Innes was determined to hold the lead and ran the ball with great confidence proving too strong in the end with another successful try and conversion, finishing the game 22 – 12. It was a emotional end to a long season for our players and watching as their emotions spilled over was heart breaking.

It was an astounding effort from our boys, their coaches and the entire Minor League community to make the Grand Final and the 10s should be extremely proud of their efforts throughout the entire football season.

The Minor League Presentation Night will be this Saturday at 12 noon at the RSL club to honour not only these players but all the players, coaches and volunteers for Bingara Minor League. Lunch is provided and the committee are just asking for a gold coin donation to help cover the costs. We look forward to seeing all the players and their families there.