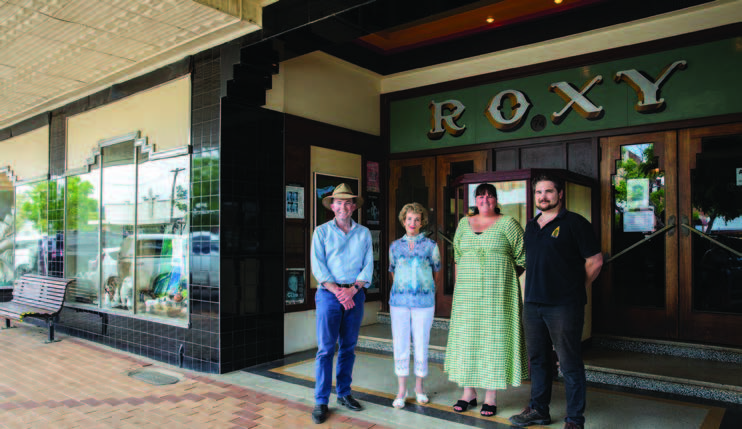 Mr Marshall said the almost 90-year-old theatre is a rare surviving example of an inter-war art deco cinema and every effort needs to be taken to protect its structural integrity. “The Roxy Theatre is one of a handful of cinemas of its era that is still intact and operating as a working space for community entertainment,” Mr Marshall said.

“Since the Roxy was given state-significant heritage status in 2017, it has been recognised that lots of work is required inside and out to ensure the building remains safe, functional and in its original state.”

“Next year, Gwydir Shire Council will develop a Conservation Management Plan for the building which will identify issues with the building and guide future works, use, and management of the culturally significant structure.”

“This grant will kick-start immediate and obvious renovation works including painting the facade and awning and installing LED lighting. Repairs will also be undertaken to the internal hallway which has experienced damage caused by ground movement during the prolonged drought.”

“The Roxy Theatre and Peter’s Greek Café is an important link to the story of Greek migration and settlement in country NSW in the first half of the 20th Century. That history can’t be lost to time and I am pleased the community is putting in such an effort to keep the Roxy’s doors open and ensure the show going on.”

Gwydir Shire Council General Manager, Max Eastcott said the preservation of the Roxy Theatre was key to continuing tourism development in the area. “With its distinctive street presence, luxurious interior detailing and intact shops, the theatre and adjoining café, the Roxy is a rare gem,” Mr Eastcott said.

“The Roxy Theatre is one of the most diverse buildings in the Shire utilised as a town hall, theatre, cinema, function, and conference centre for the township of Bingara and surrounds.”

“With the future in mind, an extension to the side of the theatre behind the cafe has been made to accommodate the commercial kitchen and to allow the facility to also be used for a variety of educational purposes in hospitality, event management and tourism.”

“Heritage consultation for developing the Conservation Management Plan commenced in January 2022, with the urgent work beginning in February 2022 in conjunction with the installation of a new Council.”

“Shire staff and local contractors are prioritised to compliment the guidelines of a heritage consultant.”

“On behalf of the community, Council is very appreciative of the State Government’s support to get these works started.”