A New era has spawned for the community-run Bingara Fish Hatchery, with Northern Tablelands MP and Minister for Agriculture Adam Marshall announcing a $174,905 State Government grant to redevelop the facility and grow its native fish breeding program.

At the height of the drought in 2019, the hatchery and its volunteers were instrumental in saving native fish, including large Murray Cod, which had been rescued from isolated and drying pools in the depleted Gwydir and Horton rivers. 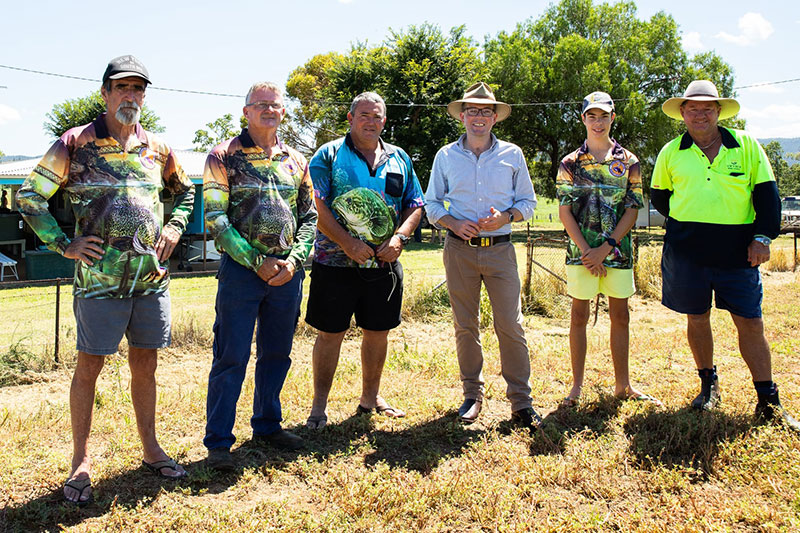 “The hatchery, in its current form, has served the community for decades, but a number of infrastructure issues in recent years have made it unsuitable for the breeding of large native fish like Murray Cod and Golden Perch,” Mr Marshall said.

“In order to improve and modernise the facility, Gwydir Shire Council will extend the existing skillion roof and put down a new concrete slab under the area designated for new breeding tanks.  This will enhance the output of fish by protecting brood stock from birds and make the work site safer for volunteers. New fencing around the hatchery and ponds will turtle proof the grounds, reducing the loss of fingerlings.  The large storage dam on site will be resealed to stop water leakage, helping also to reduce the amount of power used for pumping.”

Fishing Club member Stuart Lanagan says the funding boost will make a great difference to their operation.  “Now we will be able to breed cod and yellow-belly here every year, whereas now we can only do one or the other because we don’t have enough room to breed both,” he said.

Being able to breed fish locally has been imperative to the health of the Gwydir River, particularly over the recent drought-affected seasons.  “Two years ago, watching these dedicated fishos trawl the drying riverbed in search of fish was heart breaking,” said Mr Marshall.  Now, these dedicated volunteers will have greater capacity to assist with future drought recovery operations and play a part in the rebuilding of these iconic native species.”

“As we have seen in other areas of the State, without facilities like the community-run Bingara hatchery, commercial hatcheries and with government facilities we would not be in this position to rebuild fish populations devastated by drought,” he said.  “Through a series of grants, the Bingara hatchery has already purchased modern, new breeding tanks and water filters.”

“With the added protections delivered by this latest funding, Bingara Fishing Club members will recommence a regular breeding program, which will hopefully result in tens of thousands of young fish bred for reintroduction into local rivers each year.”

“On behalf of the region’s anglers I want to sincerely thank the club and council for the countless man hours put in to preserving and protecting these iconic fish species and waterways.”

Funding for the project was made available through the NSW Government’s $20 million Recreational Fishing Trust program, supported by licence fees paid by recreational fishers.