PLAYERS doing battle in one of the State’s longest-running bush tennis tournaments will have to adapt to dfferent playing surfaces this year, with Northern Tablelands MP, Adam Marshall announcing a $178,522 State Government grant to install two new synthetic tennis courts at the Bingara Sporting Club.

Mr Marshall said for the first time in its 86-year history the Bingara Bush Bash tennis tournament, held on the June long weekend, would be part played on synthetic courts.

“Tennis has an incredibly rich and deep history in the Gwydir Valley, with many of the region’s best having played on one of the Bingara Sporting Club’s eight clay courts,” Mr Marshall said.

“While the courts have stood the test of time they don’t quite meet the standards of the modern game, requiring hours of preparation work and being highly sensitive to wet weather.

“This funding aims to give the club flexibility with play by transitioning two clay courts to high-quality synthetic surfaces. “Not only do synthetic courts drain better after a shower of rain, they are also kinder to your joints and limbs, absorbing impact better than hard clay courts.

“Just two new courts will be a game changer for Bingara Sporting Club, encouraging older players back for a match, giving options to expand weekly social completions and enticing new entrants to the Bingara Bush Bash.” 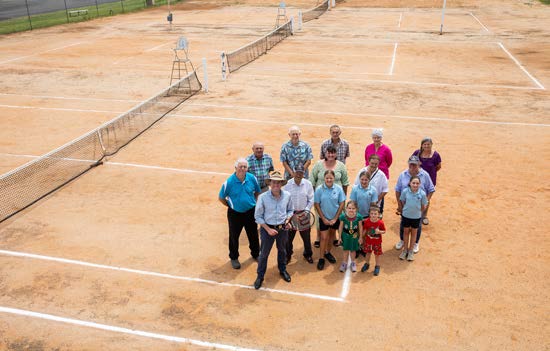 “Our committee is trying to rebuild the junior ranks and over the last few years has hosted camps in school holidays and the ‘Hot Shots Program’ for the young beginners. While these are popular, we are restricted with what can be delivered by having only clay courts.”

“They require lots of preparation work including spraying, weeding, rolling, bagging and line-marking – all of which is time consuming and requires many hours of volunteer time.”

“Once our new courts are complete the upkeep and maintenance will be minimal, allowing us to put more time into the remaining four clay courts and playing the sport we love. Also, having synthetic courts playable all year round means members of the public will be able to book a hit with friends at their leisure.”

“It is my hope that work will be underway by March 2022 and the new surface will be down in time for next year’s Bingara Bush Bash.” “We thank Adam and the State Government for their support in making the Bingara Sporting Club such a fantastic community facility.”