Heritage Minister Peter Garrett, has announced the inclusion of the Myall Creek massacre site on the National Heritage List.  Minister Garrett made the announcement while attending a memorial service for the 170th anniversary of the massacre. 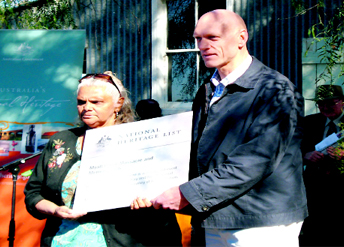 “The events at Myall Creek resonate across the years and the listing of the Myall Creek Massacre and Memorial Site formally recognises a pivotal moment in Australia’s history,” Mr Garrett said.  “The fact that so many people gather each year from the Myall Creek community, Indigenous elders and the relatives of those killed to honour and remember those who died and continue the journey of reconciliation is a testament to the communities deep understanding and acknowledgement of this crucial chapter in our history.

“We know that during the European colonising period, in Australia, there was widespread frontier conflict, It existed right across this country, and there was fighting between early European settlers and Aboriginal people.

“We also know that tragically, sometimes, these conflicts ended up in actions like rounding up and killing Aboriginal people.

“That day was spent pursuing Aboriginal people that a group of settlers had discovered, some 30 Wirrayaraay people from the Gamilaroi nation, they were rounded up and tied up together, and led away to be massacred.

“Two days later, the men responsible for this dreadful act, returned to Myall Creek and burned the bodies.

“But then events took a unique turn, when word of the massacre got out, and a number of men of good conscience, reported the atrocity to the authorities.

“The NSW governor assigned a police magistrate to investigate the crime, and 11 of the 12 suspected Myall Creek murderers were arrested. But it took two trials before seven of the men were found guilty and hanged.

“The trial divided people, some said that justice was done, while others said the condemned had done no wrong. The trial fed into a hardening of attitudes that existed in our country for some time after that period.

“But those attitudes have changed, and they have changed for the better. It is historically a really critical time and immensely critical period of history, and an immensely significant historical action, because it was the first and last time the colonial administration intervened to ensure that the laws of the colony were applied equally to Aboriginal people and settlers involved in frontier killing.

“The conflict of 170 years ago has given way to a new understanding of Aboriginal peoples’ attachment to the land. Recognition of this attachment and the sometimes brutal ways in which Aboriginal people were dispossessed are important in the journey of reconciliation.

“The Myall Creek Memorial was established in 2000. The fact that the descendants of some of the people massacred on that horrific day in 1838 and the descendants of those charged with the crime can come together in their own peaceful and personal reconciliation gives me great hope for our country and makes me very proud to be an Australian,” Mr Garrett said.

The National Heritage List showcases natural, historic and Indigenous places of outstanding heritage value to our nation. It reflects the story of our development – from our original inhabitants to present day, Australia’s spirit and ingenuity, and our unique, living landscapes.

Myall Creek is the 79th place to be included in the National Heritage List, joining other Indigenous sites including the Hermansburg Historic Precinct, the Brewarrina Aboriginal Fish Traps, the Budj Bim National Heritage Landscape and the Mount William Stone Hatchet Quarry.