Casting the net for jury duty

It isn’t often that audience members get the chance to decide what happens in a live performance, but when the jury is chosen in You the Jury which opens at the Roxy Theatre on Saturday night, the end of the play is anyone’s guess.

There is no scripted resolution to this one-act play, directed by Christine Fry.

The jury and the audience will be presented with the facts and evidence of the case by the Crown Prosecutor and the defence counsel. 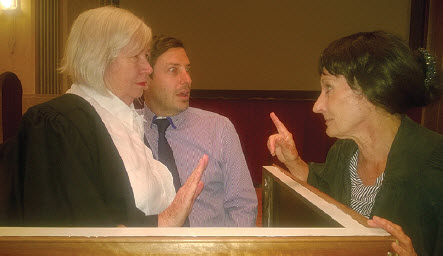 The play is set in a court room where William Hughes, played by Saul Standerwick, is charged with larceny by television hostess, Clarissa Townley (Wendy Wearne).

Narrator and Court Clerk Rick Hutton has a particularly important part to play.

Martin Hansford is returning to Bingara to put the finishing touches on the production with his sound and lighting skills.

‘You, the Jury’ opens on Saturday evening at 7.30pm, and has a matinee performance on Sunday at 2.30pm. It continues the next weekend Saturday 19 and Sunday 20, at the same times as this week.

Included in the ticket price of $25 is afternoon tea after the two matinees, and supper following the two evening performances.

These are catered for by four local organisations, the Lions Club, the local committee for the Westpac Rescue Helicopter Service, CWA, and Friends of Touriandi.