Australian soprano, Alexandra Hutton has qualified for the finals of the Belvedere Singing Competition 2013. It is one of the world’s major singing competitions.

What makes the Belvedere Singing Competition so prestigious is the exposure that young singers get to opera houses from across the globe, with many managers and directors from the “big houses” attending, and forming the judging panel.

Lexi, is from Bingara and she auditioned for the Belvedere in her "home base", London UK, where she graduated with her MMus (Distinction) from the Royal College of Music.

Lexi is one of about 150 finalists, being selected from more than 3000 entries across the globe, to compete in the Belvedere.

The Belvedere is in its 32nd year. This year, auditions are taking place in 55 cities around the world, including Tokyo, Seoul, and Chengu, San Francisco, New York and Paris, and in the Southern Hemisphere in Cape Town, Buenos Aires and Melbourne.

In each city, young opera singers are vying to make the finals, which will take place this year in Amsterdam, The Netherlands, in July.

This is Lexi’s second Belvedere final. She auditioned in London in 2011 and competed in that year’s finals in Vienna. There she gained second place in Operetta, and was also awarded the Deutsche Oper Berlin Sonderpreis (Special Prize) for 2013-14. Lexi will take up her year-long engagement contract with Deutsche Oper Berlin, in August.

Lexi was recently "home in Oz" where she combined a well earned three week break with her family, with some visits and workshops at her previous schools, Bingara Central School and PLC Armidale, and showed her developing talent at a sell-out concert, at Bingara’s Roxy Theatre, presented by Opera Northwest. 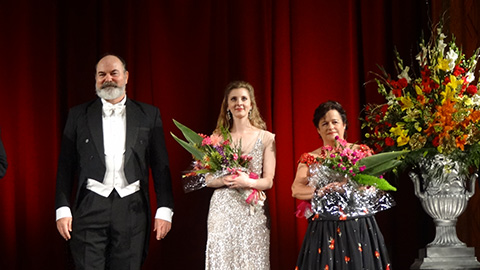 Pictured: At “A Night at the Opera” at the Roxy Theatre, Bingara, soprano Alexandra (Lexi) Hutton centre, with Bass David Hibbard and soprano Peta Blyth.