A Glimpse back in time…

Contributed by the Bingara Historical Society. An extract from J.T. Wearne’s book Bingara 1827-1937.

Early Buildings in Bingera
A site for a town was surveyed and laid out by the Government Surveyor Galloway in 1852 under instructions from the authorities whose policy it was to establish towns and villages at good river crossings where teamsters had a regular stopping place on good feed and water. 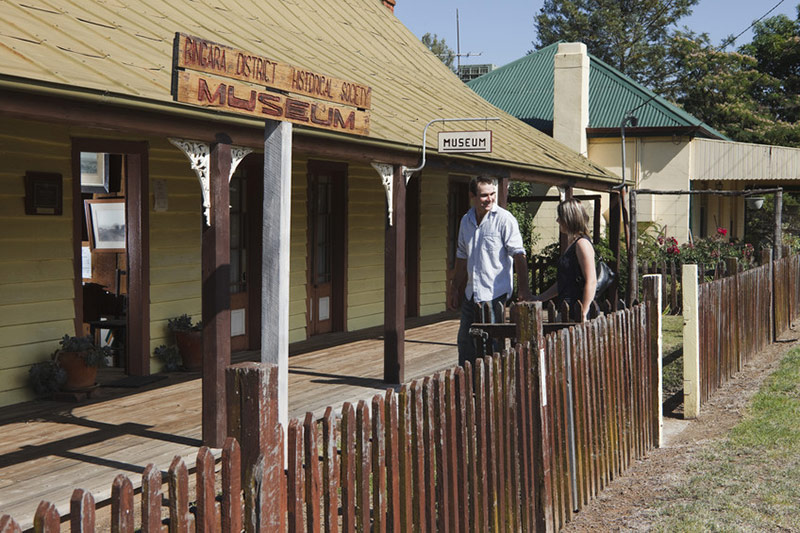 In 1854 Patrick Read, an Irish emigrant, opened Bingera ‘s first general store, and the town continued to grow in size, though not at a rapid rate.

For a start there were nearly as many buildings on the north side of the river as there were on the south side, including a hotel, store and blacksmith’s shop, but gradually the population moved over to the south side.

Because of bark roofs, which were not suitable for catching water, the first buildings had to be situated near the river from where water for domestic use was carried in buckets, generally with the aid of a shoulder yoke, or in casks carried in carts or on horse-drawn forked slides.

Inns, hotels and some private householders lost no time in sinking wells, for water could be found at quite shallow depths and there were many wells throughout the town. The advent of iron roofs simplified matters quite considerably. The early settlers became very adept at ‘making do’ with what they had.

The Post Office Hotel, now Bingera’s Historical Museum, one of the ten first buildings in the town and said to be the first building in Bingera to cater for paying guests, is a case in point. Built of cypress pine slabs, cut out by a pit saw or broad axe, the original building had no metal of any sort used in its construction – not even a nail. Upright slabs were let into channels to top plates and ground plates, mortises were used where necessary and wooden pegs used in place of metal nails. 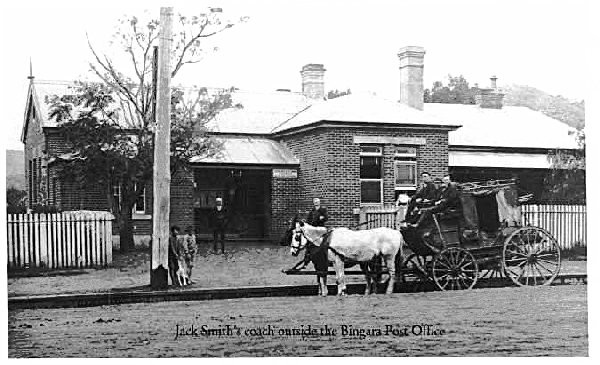 First Post Office
In 1855 a post office had been opened at the gold diggings at Upper Bingera and a horseback mail service between Tamworth and Warialda was carried out once a week.

In 1862 Gill had the Tamworth – Manilla – Barraba – Bingera – Warialda contract. He carried out this service, which was twice weekly by horseback, for some years. Early in 1862 the ‘residents, householders and others of the township of Bingera and neighbourhood’, twenty seven in all, petitioned the Postmaster-General for the establishment of an office at the ‘Bingera Township’. As a result the township of Bingera’s first post office, was opened on 9th July 1862.

[Please note that the name of the town was changed from Bingera to Bingara in 1890.]

The Bingara Museum Complex is open every Tuesday, Wednesday and Saturday from 9am – 12pm or at other times by appointment only.