Last week an enthusiastic group of community members worked on mulching the water edges and perimeter of the Feature Lake at The Living Classroom project at the south-west edge of Bingara. 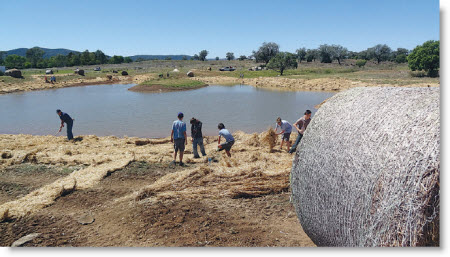 Sixteen secondary students from Bingara Central School (BCS) accompanied their Principal Mark Vale and other teachers to meet with Parks and Gardens staff from Gwydir Shire Council (GSC) and a total of ten community members to spread the 120 round bales of straw mulch.

“The result will be the creation of an aquatic environment at the Feature Lake to become a pond ecosystem to be enjoyed and studied by visitors and students,” said Bingara and District Vision 2020 President, Rick Hutton.

“Already the water birds have started to feed and rest at the lake, now the plants, insects, frogs, turtles, yabbies and fish will be encouraged into the system.

About 20 megalitres of water can be captured and used on the site,” he added. “This water is mostly directed into the Main Storage Lake in the middle of the site by a network of banks and swales. From there, water is syphoned down to the Feature Lake, which will be permanently kept at its full level,” Rick explained.

The “mulching bee” coincided with a working visit by John Mongard, the award winning landscape architect who designed The Living Classroom. John spent four days in Bingara assisting the GSC road crew to layout and form many of the access roads and walking paths that will define the various zones within The Living Classroom.

“Early in 2013, the Gwydir community will be invited to participate in two initial planting projects at TLC,” said Rick Hutton.  “A community forage garden is planned for near the access road, and a ‘family tree’ grove of fruit trees will feature in the north eastern corner below the Feature Lake,” he explained.