A MOMENT IN TIME SETS UP A LIFE LONG HOBBY

It’s a fascination that William Grover has had for almost as long as he can remember – how clocks work, and it is obvious once you step through the front door of the Bingara home he shares with his wife.

“Me and my cousin used to get out in the rubbish dump when we were little and find them (clocks),” said Mr Grover. A self-taught clocksmith, his extensive knowledge began from pulling things apart and putting them back together again.

The curiosities that Mr Grover has collected over time come from far and wide, in all states of repair. Many clocks he has taken on have been in a condition a long way from their prime, having been left and forgotten. 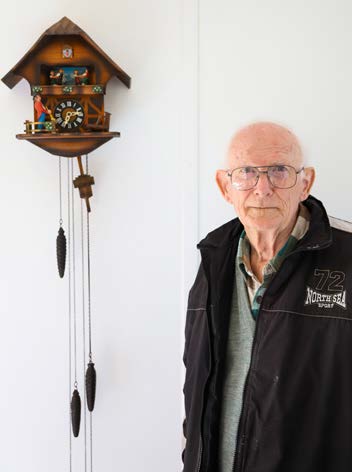 A particularly sullied example stands out amongst the others. “It had been sitting on a mantle piece for 100 years, above a fireplace,” he said. “The soot and grease can be removed, though.”

The variety of clocks is astounding, from the smallest of timepieces to cuckoo clocks whose chains fall most of the height of a wall. There are hands, pendulums, weights and cogs, movements, horns, tools and bellows, scattered across most rooms of the house.

With an old-fashioned hobby that has moved into the modern era, Mr Grover scours the internet and Facebook groups for clocks and parts. While it is mostly cuckoo clocks that take his fancy, there are many other curious examples that are placed on shelves and mounted on walls throughout the house.

There are clocks from around the world from Belgium, France, America, Germany and Egypt, and there is a story held within every single one. For a man obsessed by all things ticking, it is striking that Mr Grover cannot always stand the sounds of the overly loud chimes.  “We have to stop that at night,” he says. “When it’s dead still at night time they’re loud as buggery.”

And while his wife would love to reclaim some of her space, and can even tolerate the noises and chimes, there is always a push for more time-focused wall space. “I want to take that horrible painting off the wall, but she won’t let me” said Mr Grover, pointing to a large floral artwork hanging above a lounge. The battle for wall ownership in this house is real.

It can be a challenge to keep things running, with parts expensive and usually required to be sourced from overseas, Mr Grover is often able to make his own. Sometimes he starts from scratch, other times he takes parts from discarded clocks to make one whole again.

“One of the biggest problems is kids pulling the chains off cuckoo clocks. You’ve got to pull the whole clock apart and pieces fall out everywhere. Then you’ve got to remember how to put them back in the right place,” he said. It’s a hobby that takes a steady hand, time, patience and dedication with the cost of repairing something more often than not out-weighing its value.

Having handled clocks of all shapes and sizes, some going back to the 1850s, Mr Grover is not done yet. Holding a piece with its winding mechanism at the front and pondering at how unusual it is, this is what keeps him going. He is still able to say, “I’ve never seen one like that before.” 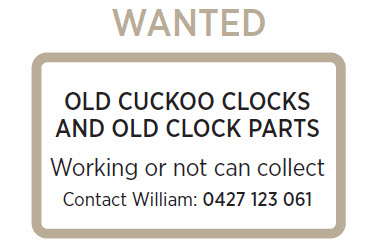