A Rainbow of Debutantes

Nine young ladies were presented at the Lions Rainbow Debutante Ball, held at the Civic Centre last Saturday week.  The debs were presented to Senator John Williams and his wife Nancy, Deputy Mayor, Catherine Egan and her husband Ian, and Lions Club president, Ian Grieve and his wife Betsy. 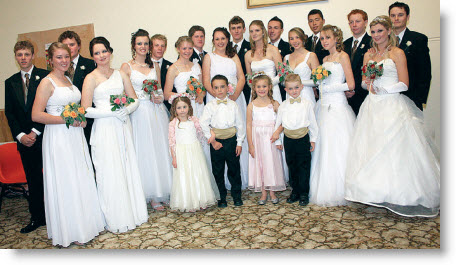 The debs and their partners then impressed those attending the ball with their dancing, showing what they had learned from tutors, Brenda McManus and Peter Reading.For several weeks, the debutantes and their partners have been regularly attending dancing lessons in readiness for the special night.

Master of Ceremonies was John Wearne, and compere, Susanne Hughes described each girl’s dress as they made their way through an arch along a carpet in the middle of the hall, and up to the stage, where the Matron of the Ball, Judy Adams, introduced each deb to the offiial party

.The cutting of a giant rainbow cake and presentation of gifts concluded the formal part of the evening, and the debs, their partners, families and friends danced the night away to a mixture of music by Delungra duo Con and Gail Mureau, and recorded music.