A rich display at the Show Pavilion

Activity at the Bingara Showground Pavilion was bordering on frenetic last Friday with all sections preparing for the annual Bingara Show. An impressive number of ladies of all ages were there taking entries, noting names and preparing to display the huge variety of items received.

Pavilion Chief Steward, Laila Hosegood told the Advocate that “although the numbers of entries was down, a rich display was on show for visitors to the Pavilion. The ladies did a fantastic job on Friday putting it all together.” 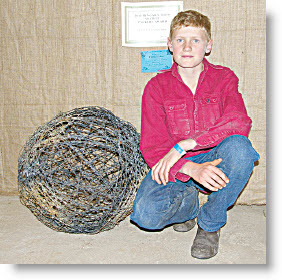 Twelve year old, Sam Cannington (left) won the inaugural “Packers’ Prize” of $100 for his unique sphere, constructed using rusty barbed wire. The male cooks at the Show Society barbecue stand formed the judging panel. According to Mrs Hosegood, the decision was not an easy one, with so many beautiful items on display but following lengthy discussion, Sam was awarded the prize.

Wool Steward, David Young told the Advocate that “we had the biggest display of wool we have seen for years and it was all from merinos. The entries were excellent quality as well.”

Entries in the Sheep section were down on previous years.  Sheep judge, Ron Greenaway, blamed the wet weather, and “there are just not as many sheep in the district as there used to be, unfortunately.”  Mr. Greenaway said the sheep that were there were beautiful quality and the lambs were in excellent condition.

“Hughie Coulton, with his usual Merino ewes, won the Merino Ewe pen, and he also had a pen of heavy weight lambs that won a ribbon, while Johnnie Rogers from Delungra had the champion pen of lambs,” Mr. Greenaway said.

The Bingara Advocate has pages of wonderful images from this year’s Bingara Show.