A winning day for the Johnson family

A crowd of enthusiastic anglers, many of them young people, gathered at the Bingara Hatchery on Sunday afternoon for the presentation of prizes at the annual Easterfish competition.

Although entries and the subsequent fish numbers were down a little on last year, a number of good fish among the 211 weighed in. Catfish were to the fore of the weighed-in fish, with 118 caught. These were all weighed in at Copeton Dam because it is illegal to catch catfish in the river. Forty one Golden perch, or yellowbelly were weighed in, while 14 cod were registered in the competition. 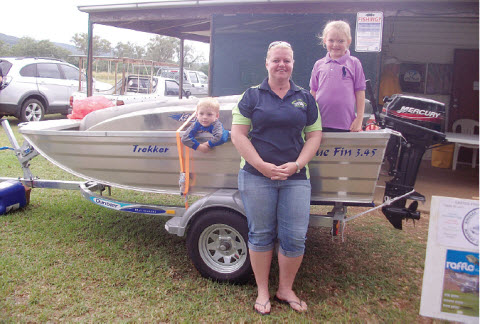 Winner of the Anglers Club major raffle, Kylie Johnson, with children Liam and Blaire in the new boat. Blair won a couple of prizes in the Easterfish competition.

The local streams now have 38 fewer carp after the competition, 14 of which were caught by Sean Siege.

The biggest carp, a 4.580 fish, was caught by Peter Gambrill.

The Johnson family have a head start to continue their winning form next year, as Kylie Johnson, mother of prize winner Blaire, won first prize in the Anglers Club major raffle, a boat, motor and trailer.

The committee members were also thanked for their assistance.

A raffle with proceeds going to Bingara Care for Kids was won by Rosemary Akers. Second was Fiona Rattray and third Gwen Baldock.