The North West Theatre Company’s Annual General Meting was held in November. Below is the President, Rick Hutton’s Annual report:

In 2018 the NWTC were very active especially through the middle half of the year. We presented and/ or hosted four activities during that period and variety was the key word.

In April we presented “Back from Berlin” with Lexi Hutton presenting a wonderful Opera Lounge at the Roxy accompanied by pianist Tom Williams formerly from Moree. The full house was delighted by the quality of the performances, made more local and interesting by the conversations with guest host Peta Blyth OAM, between the performance pieces. The Friends of Touriandi made the experience even more enjoyable with a wonderful afternoon tea. Both Lexi and Tom have had and continue to have exciting careers in the world of music. 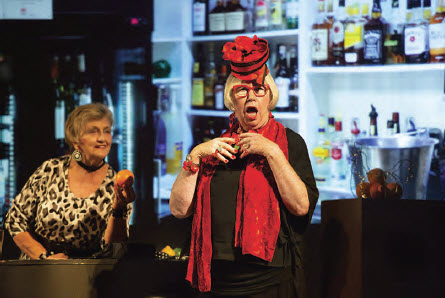 A scene from An Artist, Farmer and a Scientist walk into a Bar: Mrs
Philippa Glass – The Bartender, played by Johnette Walker, and Ms
Esme de l’Orange – The Artist, played by Linda McDouall. Photograph
by Alex Wisser, an artist and creative producer co-founded Cementa
Comtemporary Arts Festival in Kandos, NSW.

May saw the NWTC host the quirky dinner at the Roxy to launch “An Artist, a Farmer and a Scientist walk into a bar …” where the evening included a comic play of the same name. Two hundred and thirty guests enjoyed the combination of theatre, fine ‘wild’ food and camaraderie to launch an eighteen month arts collaboration between the Bingara and Kandos communities. Ros Moulton, Garry and Linda McDouall, Johnette Walker and Rick Hutton portrayed the wild and whacky mix of bar characters to the delight and possible education of the audience. A simple yet effective set was created by Paul Moulton, Geoff Leech and other helpers.

In July we presented our major project for 2018. “Showcase – Under the Spotlights!” was an ensemble production with a large and varied program featuring many regulars and some new performers at NWTC. Congratulations to all involved especially those who took on producer and director roles for the first time.

Following on from the Opera Lounge in April, pianist Tom Williams returned to the Roxy in September with his musician mate Robert Manley in a presentation we titled “Strings Attached”. They had the choice of the Roxy Yamaha or the newly acquired baby grand piano and chose the latter for their performance of classical music. Robert’s virtuosity on cello, recorder and both together on dual piano, made for a magical afternoon of beautiful music.

Unfortunately our intended production of “It’s My Party and I’ll Die if I Want To” had to be postponed. We will need to carefully consider our future plays from the point of view of Directors. This will have to be a priority for the new committee.

Throughout the year we have had regular play readings organised by Lee Loudon. Many have turned up to read a part or two and we have identified several plays as showing promise for future productions.

The Film Club has continued with growing support this year. I’m sure that John will give us the details in his report. On the matter of our committee for 2019 we may need to find some new members at this AGM. Henry Martin has resigned from the Company and others may have good reason not to run again this time. As for me, I am willing to offer myself again for President, for one last year. It is important, I believe, for all community groups to refresh themselves with new leaders and office holders bringing new talents, ideas and concepts and develop skills in the process. It is also important to encourage “fresh blood” as Count Dracula once theatrically said.

I thank our Executive Team of 2018, Tanya, Susan, Jenny, Lee, Sally and Henry for their support and energy. Along with our regular supporters, performers, and production crew you have helped to keep the NWTC active, varied and profitable. I also thank Georgia Standerwick and Jen Mead for their support at Gwydir Shire Council and the Management, Councillors and staff at GSC for their support. Thank you to our audiences both local and beyond Gwydir Shire for coming to our shows and rewarding our efforts. We promise to continue to provide you with quality performances and productions in 2019.

We will be soon farewelling John and Wendy Wearne and Sally Olive from Bingara. They have all been great supporters of the NWTC and I especially thank John for his long term as our President and for the successful birth, childhood and now growing maturity of his special “baby” the Film Club. This has been a great addition to the NWTC and a wonderful asset for the Roxy and our community.

Our new committee for 2019 is Rick Hutton (President); Lee Loudon (Vice President); Tanya Heaton (Secretary); Susan Hutton (Treasurer); Jen Mead (Publicity Officer) and Rachel Heaton and Carmen Southwell as Committee Members. Membership fees are now due and remain at $10 for an individual and $20 for a family. I thank you all for your support this year, and look forward to an exciting 2019 for the North West Theatre Company.