The community has pulled on its reading glasses and dusted off its favourite books to mark the official opening of the new purpose-built $520,000 Bingara library at the town’s Civic Centre. 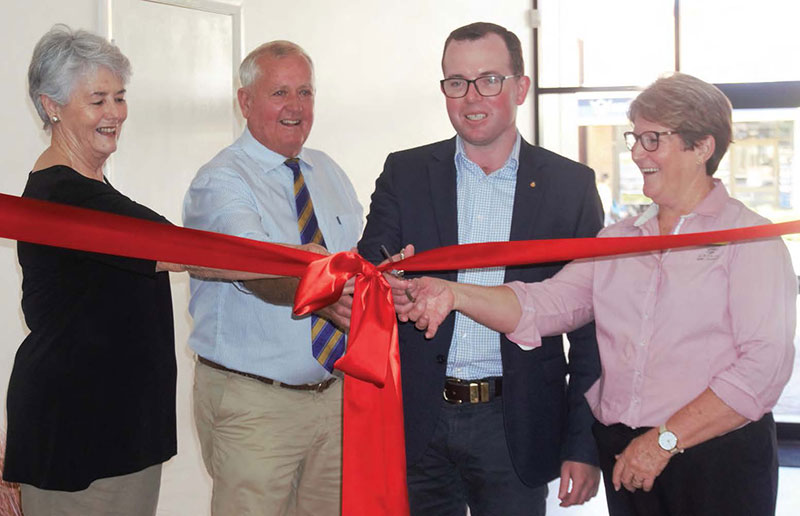 The transition of an old and essentially unused space has had grand results.  “From a tiny, cramped old courthouse building, which shared space with other services, now the people of Bingara have their own dedicated library for the very first time – where they can relax, research and work,” Mr Marshall said.

“Like the books and computers it now houses, this new state-of-the-art library really is a portal to another world,” he added.  “Decked out with comfy chairs, computers and Wi-fi, council has done a great job designing this library to make it functional for its staff and accessible to the many older people who come through its doors.

“In particular children have loved the friendly reading space, which is equipped with beanbags and plenty of space for them to get comfy and dig into a good book,” he said.

Mayor John Coulton said the building would provide the next generation of readers with a comfortable place to learn and expand their imaginations.  “On its first day operating we had 350 people come through the door to experience what the new library was like,” Cr Coulton said.

“Since then we have averaged between 80 to 100 people per day, including 28 children who take part in the regular after school homework, craft and Lego program. Because of the additional space, the library has been able to increase the number of kids who can participate in those educational initiatives. 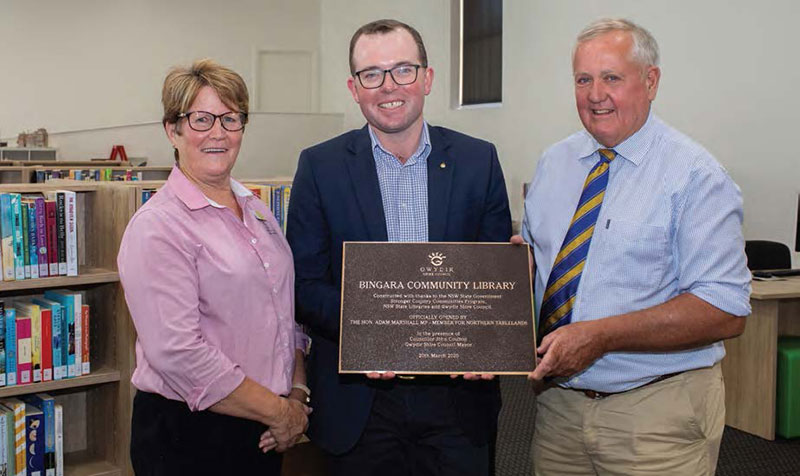 Gail Philpott, Adam Marshall, and John Coulton hold the plaque that will adorn the new library.

“I think the end result, well, the proof is in the pudding.” The project has seen the old library move from a building that was cramped and difficult to use. The transition of an old and essentially unused space has had grand results.  “The result is a modern, open library which is a great asset to the town,” expressed Cr Coulton.

“I would like to congratulate Gwydir Shire, they have incorporated all the elements of a modern library. I have seen it go from the old building, to the Court House, to here; what an amazing transition. It’s a fabulous facility for this community. It has so much potential for electronic resources and you will be set up for that sort of thing,”  said Regional Library Manager Kay Delahunt.

“I want to thank Gwydir Shire Council’s Library Services Co-ordinator Gail Philpott for the smooth way in which she handled the relocation from the old building. Gail was aided by council’s drought casual staff who did a magnificent job ensuring that books, resources and furniture were relocated to their new home.”

Cr Swain proudly echoed this sentiment. “This is Gail’s finest hour,” she said.

Concluding her speech at the official opening Gail told attendees, “I want to thank Adam for his great support of the Bingara library relocation and I’m glad he could be in here to open it with the community.”

Unfortunately, Gwydir Shire Council has had to make the decision to keep the library doors closed at the current time. Gail would like to advise that although the doors are closed, she will be offering a click and collect service, when at all possible.

?? BINGARA TURNS A PAGE WITH OPENING OF NEW TOWN LIBRARY ??It was fabulous to be in Bingara last Friday to help open the town’s new library.This $520,000 project, supported by the State Government, has seen Bingara develop a purpose-built modern library for the very first time. It’s spacious interior is a far cry from the old cramped courthouse building, which was difficult to access and did nothing to attract visitors or youngsters inside.Congratulations to Gwydir Shire Council on the successful completion of this project! ??