BingaraLatest NewsGeneralAfter a career in fashion, Susanne is happiest at home

After a career in fashion, Susanne is happiest at home 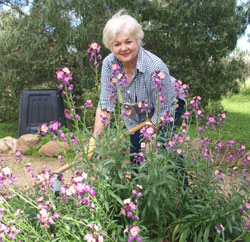 Single mother Susanne Hayes (now Hughes) and her young daughter had moved back to Bingara.  “I wanted to raise my daughter in Bingara and I wanted to work,” Susanne said.

“Frances Hanton, (now Young) was also in the same situation. There were no jobs in Bingara in those days nor were there opportunities to become independent.

“With my knowledge and training in retail and Frances’ in the banking industry we had a good combination of skills to create jobs for ourselves.

Starting with only $1,000 between them, Susanne and Frances bought “a scrap of carpet and some paint”, and moved into a half shop which had formerly held the library and is now part of the Bingara Pharmacy.“We went off to Sydney where we found a couple of outlets that supplied what we wanted,” Susanne said.

“We received the stock and were immediately gratified with the support of the Bingara people who purchased our goods. Then with the proceeds we were able to buy more stock.

“To fill the shelves we sold, for commission, garments made at home by some of the local ladies. We also sold stock for the lady who owned the rival dress shop. She eventually closed her business and went into making wool quilts.

“It was about this time that the suave David Young came along and swept Frances off to matrimonial bliss.”  Frances left the partnership, and Susanne continued on her own.

“I then moved into the recently vacated Capri Café. This was an iconic Bingara site which was a wine gooey/shop in the early days and converted into a cafe by a Greek café owner in the early 60s.  “As the locals were familiar with the name Capri I thought Boutique Capri was as good a name as any.”

Susanne’s first big break came when she was asked by the Delungra Catholic ladies to do a fashion parade in Delungra.  People came from Glen Innes and Inverell to support the fund-raiser  and liked what they saw.

“This made me realise two things,” Susanne said.  “Women didn’t want budget/casual clothing but instead wanted good quality clothing suitable for our lifestyle at a reasonable price.”

Contrary to the sometimes overheard cry of “she is too dear in there”, Susanne stocked brands that were more competitive in price than in the chain stores.
It was, though, the better end of the market where Susanne found success, and which bought people from larger centres to shop in ‘little old Bingara’.

“This led me to my second realisation, if I wanted to stock a good choice of fashions I had to reach out to a larger area, and that’s where my mother of the bride wear came in,” she said.

It was and still is difficult to buy an outfit for an older woman who wants to look fantastic for her daughter’s wedding or a special occasion without looking like what Susanne described as ‘the proverbial mutton’.  “That is why so many women, mostly by word of mouth, began to shop in Bingara”.

Susanne has always been a strong advocate for change and growth in our town.
“When I first opened Boutique Capri, the shops in Bingara would close for lunch. I thought that would have to stop if we wanted to compete with larger towns.  “We had to get with it and encouraged other business to remain open, besides what better time than your lunch hour to shop,” Susanne said.

She has participated and encouraged many events, festivals and markets in order to attract people to Bingara (to shop).

One of the projects closest to her heart is vocational training for citizens and, more importantly, the youth of Bingara.  “If we can give the young people a purpose in life AND an education, they will grow up to be worthwhile citizens who will always appreciate the value and respect the town has given them,” Susanne said.

She has been chair person of the Warialda and Bingara Vocational Program for 12 years and sits on the Gwydir Learning Committee.  “With this in mind, I urge business owners to consider employing a young person as a trainee or apprentice. This can be very rewarding and you may learn something from them.

“My last trainee was Carisa Riley who stayed on long after her traineeship had ended. By the time she was 18 I was able to leave her in the shop alone for weeks knowing full well that my customers were well attended and my business was safe,” she said.

Once, when Susanne was in Sydney on a buying trip, Carisa came to work and found the shop had been broken into.  “It was impossible for us to get back to Bingara in time to do any thing constructive,” Susanne said.  “Carisa handled everything, the repairs to the door, the police, EFTPOS supplier and everything in between.

“I had always encouraged her to think for herself, and to come up with solutions. This faith in her paid off. I thank Carisa for being a good and honest worker and I wish her the best of luck”.

Although she didn’t have her shop on the market, within a six month period Susanne received three offers to purchase.  “I thought ‘My feet have gone on me and I have already worked for 46 years,  so why not?’ and so it has come to pass.

“I wish the new owners Sue, Suzie, Betty and Patricia every success in their new venture and I hope that Bingara supports them in every way, they are doing a wonderful job in keeping my dream alive and another empty shop filled”.

Now happily retired, Susanne is busier than ever.

“I have a new grandchild coming in October, a new garden to tend to, cupboards to clean and the list goes on. I learned as a child if we were bored mum would find us a job so ‘that word’ is not used in this house.

“To the people of Bingara, Delungra and Inverell, I know you spread the word and brought your friends and visitors to Boutique Capri as one of the places to see.

“I will miss the amazing women I have met over the past 23 years, your support is what made my business a success and for that I thank you,” Susanne concluded.