BingaraLatest NewsVision 2020Ales, tales and high hopes for the future

Ales, tales and high hopes for the future

The future of Bingara looks bright after a large crowd of locals attended the ‘Ales and Tales’ event in support of Bingara and District Vision 2020 last Thursday evening.

A total of 140 guests including the team from James Squire Brewing and a contingent of staff from Stahmann’s Pecans at Pallamallawa provided a great mix with local supporters at the ‘Roxy Beer Hall’. 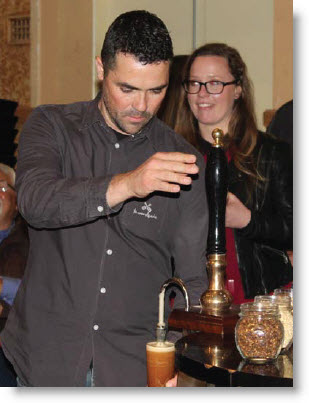 [Tim Knight from Lion Co pouring a Pecan Brown Ale which was specifically brewed and served ‘ontap for the evening.]

Each dish was matched with a beer, selected for its complimenting taste and style. A highlight of the evening was a unique ‘Pecan Brown Ale’, specifically brewed and served ‘ontap’ for the evening.

Very importantly, the evening was used to celebrate ten years of vision and progress in Bingara. A two minute DVD from Chuck Hahn, the chief brewer at Lion Co ten years ago, when Bingara and District Vision 2020 first hosted an Ales and Tales evening was shown.

“Chuck returned from the US on that day and was unable to attend, but he spoke glowingly of his previous visits to Bingara, commending the efforts our community has made,” said organiser Rick Hutton.

“The inaugural Vision 2020 President, Garry McDouall, outlined the foundation years and invited the audience to name the ‘changes’ that have occurred during the past ten years. The current Vision 2020 President, John Bishton, then introduced the process going forward, to invite our community to create ‘Vision 2030’.

“A special thanks go to our ‘beer hall wenches’, ladies from the Bingara netball club. Vision 2020 are pleased to offer $400 to Bingara Netball Club for their efforts.”

President of Vision 2020, John Bishton was particularly impressed with how the night played out “ We would like to thank Mr Hutton for all his hard work in putting the night together. It all flowed very well including the beer. Rick and those who helped him are to be congratulated,” he said.

Tim Charody, aka The Beer Pilgrim, conducted interviews during the evening with the barley growers, the maltsters and the brewers, to discover all of the steps involved in the designing of great beer products.

Jamie and Joey Lanagan provided some very relaxing backing music on guitar. The organisers thanked those who attended and supported a wonderful evening at the Roxy.