All abilities park in progress

Stakeholders in the Warialda All Ability Park project met to inspect progress on the park recently. Leeah Daley, Deputy General Manager of Gwydir Shire Council told the group that she was amazed that this park had eventuated.

The need for an all abilities recreation space was identified through community consultation as something that our community wanted, however it seemed like a dream as the cost of building such a thing was way beyond the confines of the Council’s budget.

The park was funded through a combination of the Strong Communities Drought Funding and Everyone Can Play Program. Some modifications to the original plan were necessary to allow for efficiencies.

A requirement of the Stronger Country Communities Drought funding ensured a large majority of the work on the park was undertaken by external contractors and where possible materials were purchased locally.

Some of the Everyone Can Play funding provided for works undertaken by Gwydir Council staff, with some of the work being completed in staff members’ own time. Council has sought to save money on the project where possible, and the construction of the nearby Warialda High Productivity Vehicle route has proved to be of benefit by providing the extensive amount of fill that was required to make the site suitable for use as an all abilities park. 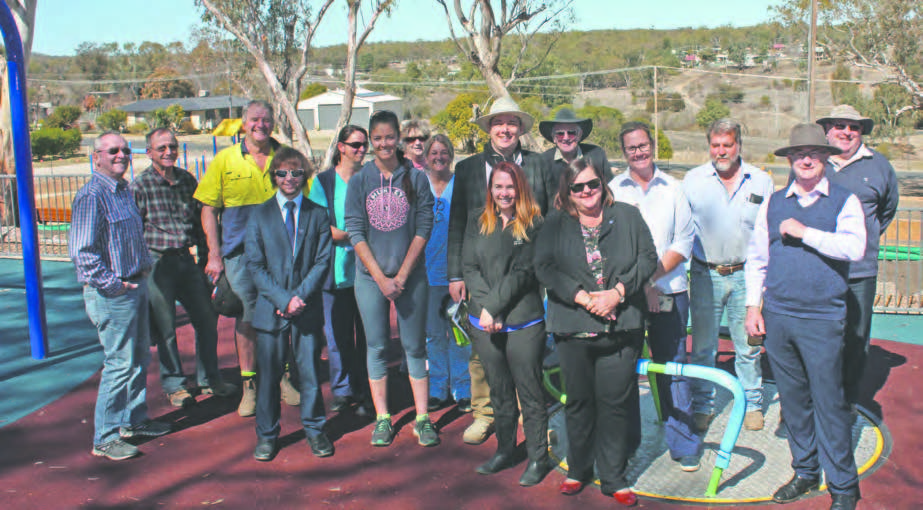 All the stakeholders who attended the inspection meeting back on August 26.

Landscape planting took place last week and other than the laying of the turf, the work is almost complete. The majority of the plantings are of native plants with a specific area being designated as a bird attracting area.

“We do have some sandstone blocks which will be used to make a ‘yarning circle’ on a flat area of the park near the solar light when funding becomes available; we are currently researching what sort of feature would be both suitable and unique to be placed in the centre of the circle” said Leeah.

Ben and Lisa Meader, from Ben Meader Constructions have donated an ‘s’ shaped all access raised garden beds, which has now been installed. Lisa explained that beds are like a ‘square s shape’ so the maximum reach into each bed is no greater than 600 millimetres. These garden beds will be maintained as community gardens and have been included in the plans as a request from Naroo and Challenge Disability services.

A number of edible plants will be planted in these gardens for all to enjoy into the future. The strawberries will be planted by the local people from Challenge this week with more delightful plantings to follow. 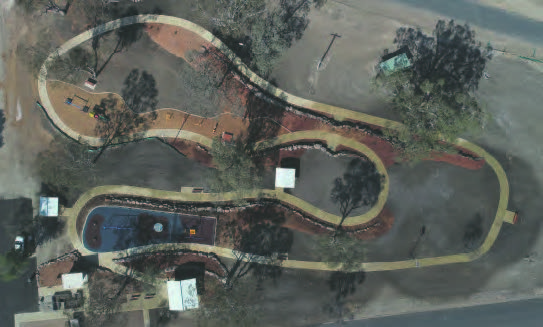 Aerial view of the progress of the Park.

Bob Swain donated his time and machinery for the original levelling of the site and Derek Rose from AC & HJ Rose and Sons donated time and material for the landscaping. Council has written to Warialda Service Clubs seeking sponsorship of items or equipment for the park. This additional support is being sought to free up funding to provide some outdoor music equipment to complete the project. Private individuals have also asked to sponsor elements of the park furniture in memorial of a family member.

Rotarian, Curly Moore, said that Warialda Rotary will help “down the track”, but that drought work is taking all the Club’s efforts at the moment. Local fitness instructor, Shandie Irwin, was delighted to see that provision has been made for a yoga lawn in the park and is confident it will be popular.

Winding through the park is a path which fits the criteria of ‘all abilities’. The path is exactly 400 metres from start to finish. Trainee Technical officer at Council, Adam Carpenter, was tasked with designing the route of the path. “I worked in consultation with the John Mongard Warialda Community Plan which gave me direction and we made it fit,” Adam said.

“The hardest part was getting the paths with disabled mobility access working within the lay of the land, but we got there.” Although all efforts were made to accommodate the existing natural qualities of the site and keep all the existing trees in the area, only two large trees had to be removed during construction. The remaining trees remain beautiful features to provide shade and amenity to the area and also importantly house the varied bird life that can be found on the site.

Further paths are planned which will link the MPS, Naroo and the All Abilities Park to the main town area. Signs directing visitors to Warialda to the park have also been ordered, and an app will also direct the more tech savvy to the park.

Leeah said that this project has been a fully grant funded initiative constructed by a skilled team of community, business and Council staff. A soft opening of the park will be held in October, with the official opening in February, 2020. In the meantime, fairy lights are festooned on a tree at the park’s entrance, which coincidentally, show evidence of possum activity. “I hope the possums are OK about the lights,” Leeah joked.