Ally preparing for her Hawaii tour

In March next year, Bingara Central School student, Ally Dixon will travel to Hawaii following her selection as a member of the “West of the Divide” Concert Band. 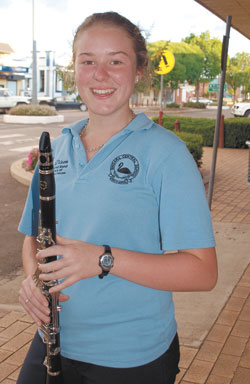 The band of 60 players will combine the best players from New England, Riverina and Western NSW Regions of the Department of Education and Training.

Three students from Warialda High School have also been chosen to tour.
The students were chosen from their involvement in Regional camps and Tours and the State Wind Band program.

“This tour will participate in the Pacific Basins Band Festival and will give students the opportunity to be part of a large festival of Concert Bands and to work with professional and experienced conductors from the United States of America,” Regional Arts Coordinator with the Education Department, Di Hall, said.

The tour will leave Sydney on 19 March and return on or about 26 March.

Warialda High Music teacher, Robyn Conway, will also be on the tour.
Ally will take part in a camp at Dubbo in January to prepare for the tour.

The School P&C and Band Support Committee have both provided $300 to support Ally’s fund raising efforts. A night of performances is also planned at the Roxy to raise funds for the four local students.

Ally, who admitted to being very excited about the trip, has been playing clarinet for about five or six years.

She has played in the Opera House twice, in the Junior State Wind Band, and has toured twice with the North West Regional band.