BingaraLatest NewsNorth West Theatre CompanyAn artist, a farmer and a scientist walk into a bar…

An artist, a farmer and a scientist walk into a bar…

Have you heard this joke?

“Well until the middle of 2017 I don’t think anyone had heard it, and even though it sounds familiar and like it should have a punch line, it doesn’t … or it hasn’t until now!,” Rick Hutton, President of The North West Theatre Company said.

Members of the Kandos School of Cultural Adaptation (KSCA) in the Central West of NSW heard that there was an interesting event in the similarly sized town of Bingara. ‘Soil Carbon – the diamond in the rough’ was an event held at The Living Classroom. They had also heard of an arts grant available through CREATE NSW. They read the conditions for the grant and discovered that it had to be in partnership with another community. Bingara was suggested as a quirky candidate and so they made an approach to some of the Bingara locals, who said, “Why not? Tell us more?”

“Ok,” said the Bingara people, “so what is the punch line?” “Oh, that’s for you to decide, “ replied the Kandos crew, “… the important thing is that when artists, farmers and scientists get together, we think they might create some amazing things ….!”

So … the Bingara people said, “That is so crazy … it just might work!”

The application for the grant went in, and at the end of 2017 it was successful.

The partnership is for a series of events, including festivals and feasts and a number of ‘artist-in-residence’ activities to be shared between the two communities. The program will be launched at the Roxy Theatre in Bingara on Saturday May 5 with a play, and a fantastic feast.

The North West Theatre Company, Bingara’s own theatrical society, offered to host the launch event and to create a play called, (you guessed it), “An artist, a farmer and a scientist walk into a bar …”. Along with the play, the evening will feature an amazing food feast featuring two ‘opposite’ types of food reflecting the overlap of art, science and production when it comes to cuisine. Some of the artists, farmers and scientists involved in the program will explain what they are all about at the launch.

The ‘vegetarian’ component of the meal will be designed and sourced by renowned Sydney food forager Diego Bonetto. Diego makes his living finding ‘wild foods’, those plants that can be found in the landscape but which have been ‘lost’ in the range of ‘credible edibles’.

Perhaps Diego can be best described by this quote from a mutual friend, Costa Georgiadis of ABC TV’s ‘Gardening Australia’ who said, “Diego…It was an absolute pleasure to spend the day in your world yesterday, eyes down and mind open to the possibilities, the stories and above all else the honesty and sharing of your wealth of information and experience.  It is great to know that you are putting the perspective out there, challenging the status quo and helping inspire a new level of respect for plants, our medicine and our food. Walk far and wide, lead people onto the path and continue to gather more stories.. Every story shared builds a vibrant inquisitive future. Thanks for what you do!!!” – Costa Georgiadis, Gardening Australia 2012

Diego will ‘guide’ the Friends of Touriandi in a safari to forage for the wild foods about Bingara and bring them to the Roxy Kitchen where they will be blended with more familiar items to present the mouth-watering and visually appealing vegetarian options. On the other side of the room will be the crafty carnivorous cooks whose mastery of the smokehouse, the oven and the barbecue will see them present an equally amazing array of organic meats including, slow cooked beef ribs, thick cut rump steak, slices of whole pork sirloins, pork and fennel sausages and organic beef sausages.

Led by Inverell farmer and activist Glenn Morris, the meat team will attempt to counter the vegetarian artistry. As Glenn says, “We should be conscious that many a vegetarian has been converted in the past, by the delicious omega 3 aromas of our eco-connected cuisine.”

All these things are happening in May, and that’s just at the launch dinner. Expect to see and hear of much more over the next fifteen months as the artist, the farmer and the scientist find their way into that proverbial bar, and where you are very welcome to join in. 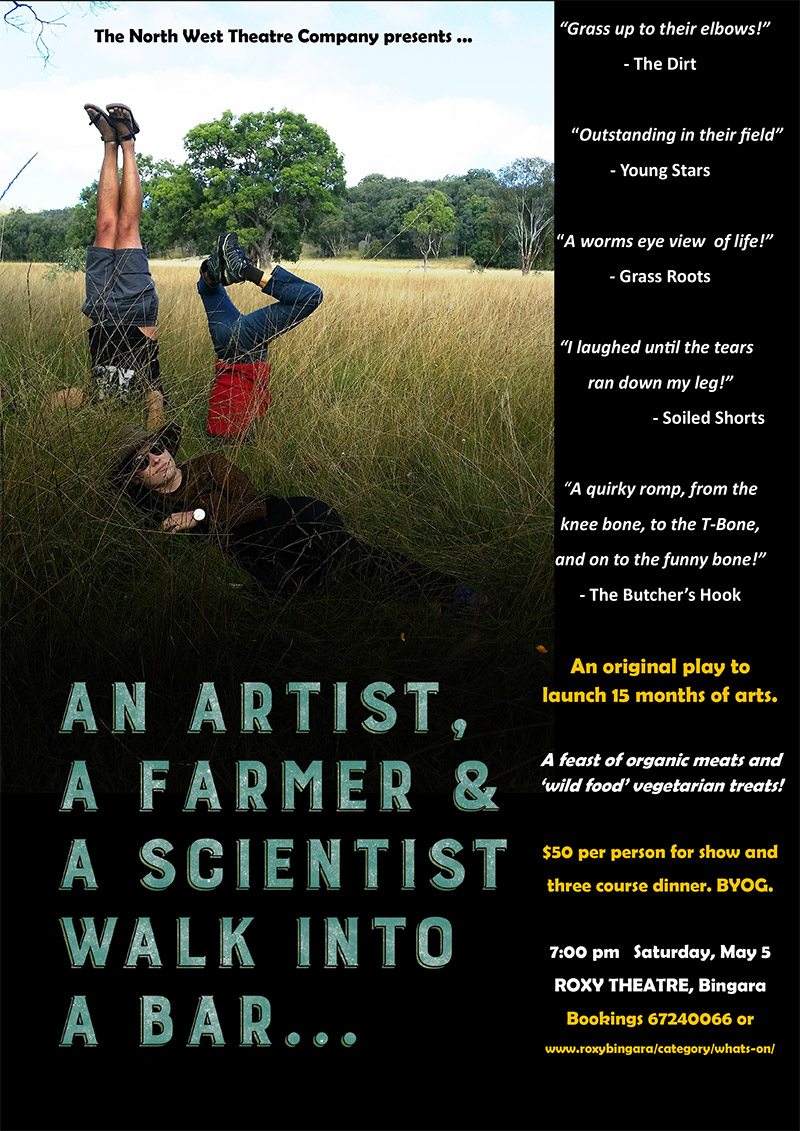