An evening of Kytherian celebrations

Over 300 people joined in a night of Greek feasting under the stars on Saturday to celebrate the opening by the NSW Governor, Her Excellency, Dr. Marie Bashir, of the Roxy Greek Museum.

The governor spoke about the way the Greek people had fitted into creating what is the Australian spirit.

“Beautiful Bingara has given so much to our state over the years in so many ways, contributing to the great sense of community, to our soldiers who went to two world wars and indeed, to that sense of mateship and rural prosperity, Dr. Bashir said.

“Major contributors to that sense of community and wellbeing have been the members of the Greek community who have gone to so many country towns and added to the culture and prosperity of those country towns such as Bingara.”

Dr. Bashir spoke of the contribution the Greek people have made to civilisation over thousands of years.

“Now the wise people of Bingara, Cr. Coulton and your fellow councillors have had the wisdom to realise that this wonderful piece of heritage will now be held in the hearts and minds of future citizens of Bingara and all those with Greek Heritage.”

Dr. Bashir unveiled a plaque to mark the occasion. 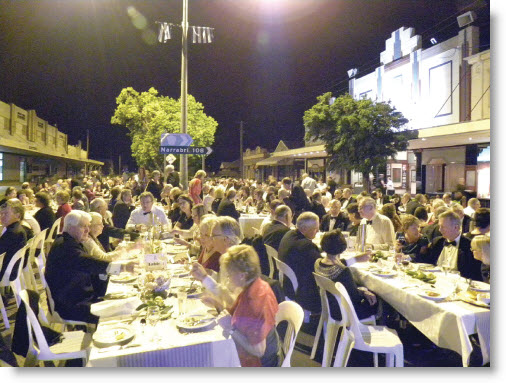 Part of the crowd of over 300 who dined in Maitland Street outside the Roxy complex on Saturday night. The NSW Governor, Her Excellency, Professor Marie Bashir AC CVO, in seated in the right, foreground, seated next to Mayor, Cr. John Coulton.  (Click on the image to enlarge.)

See next week’s Bingara Advocate for more photographs and stories.