An Orange Festival to remember

The 2011 Orange Festival has been hailed a great success with many community members commenting on how well the festival ran.

The festival, officially opened by Mayor John Coulton, provided the Bingara community and passers by a day of entertainment. Buskers could be heard up and down the street as they played their guitars, saxophones drums and sang their hearts out for a chance at winning the Busking Competition while street stalls; games and sideshows meant there was something for everyone in the family to enjoy.

The highlight of the festival, as usual was the Orange Festival Parade with a theme, the ‘Progressive history of Bingara.’ 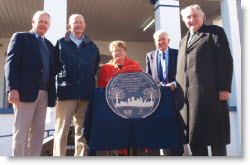 During the opening ceremony Mayor Pat Reilly from Willoughby Shire Council in Sydney presented a plaque in recognition of the ongoing friendship between Gwydir Shire Council and Willoughby Council.

The Willoughby Exchange program has been running since 1994 after the citizens of Willoughby rallied together to send Christmas presents to the Bingara children at a time that was a very difficult period for rural Australia. The program still runs today with two exchange students, Harrison Cornay and Sherry Zheng visiting Bingara last weekend to enjoy the Orange festival and get a taste of rural Australia.

Later this year, Bingara students, Taylor Wright, Kayla Honeysett and Emily Price will be traveling down to Willoughby for a chance to enjoy the city way of life.

“Bingara and Willoughby now have an amazing friendship that has developed over time,” Mayor Reilly said in his presentation. “The plaque has a memory aspect so we can remember this great friendship,” he said. Accepting the plaque was John Wearne and Peter and Brenda Pankhurst who were all instrumental in starting the program so many years ago.

Written on the plaque was:
“To foster friendship, hospitality and understanding between country and city friends”.

Mayor Coulton made his own presentation to the 5 students by presenting them each with a certificate. During the opening Mayor Coulton announced that the riverside park was to be named “The Junction” a name sent in by Mick Hayes. 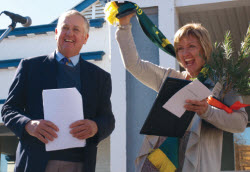 Mayor John Coulton with Joy Smith as she celebrates becoming am Australian Citizen.

There’s no other time like celebrating the Orange Festival than to become a citizen of this community and that is exactly what Joy Smith became during the official opening.

Joy Smith formerly from the United Kingdom has been a resident of Bingara for 16 months and is well known in town as a paramedic.

She first arrived in Australia July 4, 2006.  Mayor Coulton presented her with her citizenship. “I am very honoured to do this,” he said. “You chose to be here and that is terribly important to us”.

Joy was presented with her official citizenship certificates and the ceremony concluded with the singing of the National Anthem, sang by Lexi Hutton. After the opening ceremony the Orange Festival got into full swing with Alex Stones entertaining the children with the ‘Orange Olympics’.

Here participants were welcomed to join in on the orange and spoon race, the orange dunking, the orange juggling competition and so on. Meanwhile younger children were given the chance have their face painted.

The Outrageous Orange Cookoff was a hit with many participants entering all sorts of Orange dishes.

The winners of the Busking Competition, which was judged by the public, were as follows:

Congratulations goes to the other busking competitors including local boy Sam Bridey who has been playing his guitar for fours years, Luke Turner from Inverell who entertained the crowd with his guitar skills, Mikaela Mephan on her saxophone and Don and Coral Adams.

The Roxy Café was also opened for business with the Orange Festival Committee selling milkshakes, spiders, scones and tea and coffee in an effort to raise funds for next year’s festival.

Other local stalls in the street included Claire and Jake Bilsborough and Angus Armstrong who were selling their pre-owned videogames, DVDs and books.

Raising money for the toy library was a huge stall full of children’s books, manned by Tanya Brennan.

The Rural Fire Service, while raffling off a trailer load of wood were also promoting community education in fires and explaining the AIDER Program to a lot of the elderly community members. “This is a program for the disabled and elderly residents living on bush-fire prone land.” Said RFS Member, Len Baker.  “We just want to make people aware that the RFS can help them.”

The festival concluded with the live band Marty and the Moochers, whose jazzy tunes livened up the crowd.