The photo below, taken Monday morning, shows the middle lake in the Australian Centre for Regenerative Agriculture site on Bingara Common.  Soil Con’s Ross Groth and three team members are walking along the dam wall. 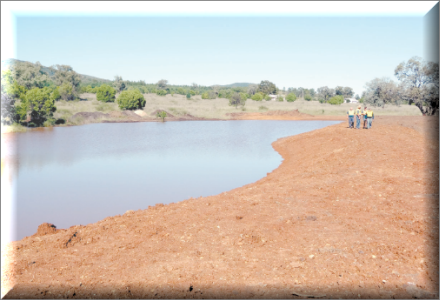 Soil Con’s Ross Groth and three team members assessing the lake, which formed in the Australian Centre for Regenerative Agriculture site situated on the Bingara Common, over the weekend after over 200mls of rain fell around the region.

The lake is about 10 Megalitres (a ML is approximately an Olympic size swimming pool) and filled over the weekend after about 150mm of rain onto the saturated catchment.

A further 50mm of rain spilled from the lake and passed through the lower lake which is still undergoing construction and was thus unable to hold the additional runoff.

The total catchment potential of the system being constructed on the Common as part of the Australian Centre for Regenerative Agriculture – A Living Classroom project, is approximately equal to the rain event experienced over the past few days i.e. about 200mm of rain storage capacity or about 14 ML.

“The system is shaping up well for the commencement of the garden and farm planting in the project in the new year,” Rick Hutton, President of Bingara and District Vision 2020, said.

“Congratulations to the Gwydir Shire Council, Soil Con, John Mongard Landscape Architects and the engineers responsible for the design and construction of the earthworks.”