With the Horton River reduced to a series of diminishing puddles, most anglers taking part in the annual Easterfish competition concentrated on the Gwydir River and Copeton Dam.

One competitor though, chose to concentrate on reducing the carp in the Horton River near her home. Erin Walker caught and removed a total of 115 European carp from the river. She explained to The Gwydir News how she quietly puts one hand under the fish, and grabs it by the mouth and the body, throws each fish onto the bank, where her siblings pick up the fish before they can flap back into the water.

Erin won prizes for the heaviest carp caught by a girl, the most overall (115), and she also won the Secret weight prize (1.420kg), a Kayak. 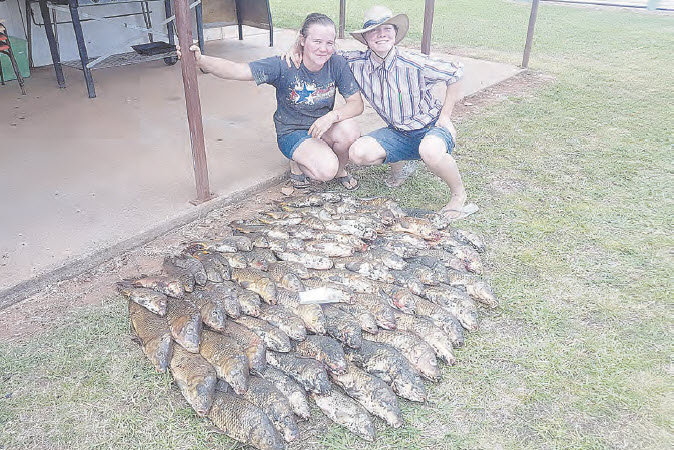 Sisters, Erin and Abbey Walker with 77 of the European carp Erin caught in the Horton River near their
home.

Anglers Club President, Stuart Lanagan said that over 200 registrations were received, up on last year, but, apart from European carp, fewer fish were caught. This year, 12 cod were caught, measured and released, along with 19 yellowbelly, and 14 catfish. A total of 168 carp were brought to the hatchery. Winners were: