Every Wednesday night members of the Bingara RSL Club are treated to a club Super Draw.

On Wed 7 December the Super Draw jackpot amount has climbed to $15,000 with an early draw time of approximately 6.20pm. The Clubs number was drawn and this enters into the second phase meaning that if the member is financial and at the club they would win a cool $15,000. The Club’s total prize money given away in the Super Draw is over $62,000 so far. 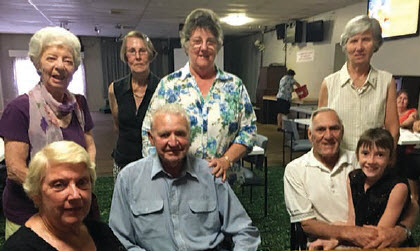 Front & centre was the winner of the RSL Super Draw Trevor Abra with wife Judy & friends who were on hand to celebrate.

To everyone’s surprise Trevor Abra membership number was called as he was enjoying drinks with friends in the auditorium. It took a little while for Trevor and Judy to get over the shock and excitement of just winning a prize worth $15,000, it was a great amount of money to win so close to Christmas.

The celebration continued into the evening and it was exciting to see such a loyal member win this fantastic prize. Congratulations Trevor from all the members, staff and directors of the Bingara RSL Club. If you would like a chance to win the Club’s Super Draw all you need to do is become a financial member of the Club and be at the Club every Wednesday between 6-8pm.