Another former student returns to teach at Bingara Central 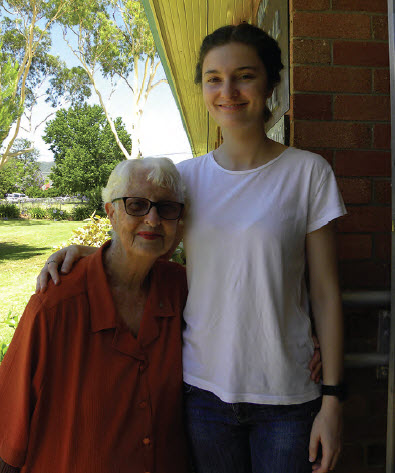 New teacher, Ellen Odell, with her grandmother, Pattie Steiger outside the school.

Ellen, who attended Bingara Central for all but four years of her schooling, was Primary Captain in 2006.

She attended Inverell High School for Years 7 to 11 before returning to Bingara Central and was Vice Captain in 2013.

She has joined the staff at Bingara Central, to teach in a temporary position next year.

Pattie attended Bingara Central School from kindergarten to what is now Year 9, achieving the Intermediate
Certificate.  She has been teaching Scripture at the school with Jeanette McGowan for 30 years. Recently she and Mrs. McGowan were appointed patrons of the school.

Pattie also helps at the school with Year 1 reading.  She told the Advocate that recently she was in her car, and a young man put head in window and said “Hello Mrs. Steiger, how are you?”  He was someone she had taught as
a little boy.

“We used to have wonderful choir at the school, and as students, we toured to Inverell and Tamworth, which I used to enjoy,” Pattie, a noted vocalist, remembered.

Pattie started singing at weddings at the age of 14. Since then she has sung at many events, but has never charged for her singing.