Another great Bingara reunion for the Nashos

Members of the National Serviemen’s Association, affectionately known as ‘Nashos’, love coming to Bingara to catch up with old mates. 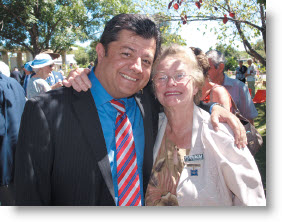 This year, about 200 people including Nashos, their partners, political representatives and the Inverell Pipe band, took part in the annual march in Maitland Street, before a ceremony at the Memorial Park, and luncheon at the RSL Club last Saturday week. Also taking part in the march were several students and Principal, Mark Vale, from Bingara Central School.

During both the ceremony and the luncheon, tribute was paid to the instigator of the reunion, the late Ken Bilsborough, whose widow, Lucy continues to work with a small committee to ensure the continuation of the annual Bingara reunion. Several Nashos arrived during last week, and some stayed on in Bingara well into the week.  A ‘welcome to the Nashos’ evening at the RSL Club on Friday began the weekend.

The main event, on Saturday, saw a slightly smaller participation than last year. Nashos who were unable to march were able to ‘hitch a ride’ in vintage cars, and take part in the parade. For a group from Queensland, the Bingara reunion has become a permanent fixture on the calendar.

A luncheon at the RSL Club on Sunday, and a barbecue at the Caravan Park on Monday night concluded the weekend.

The Bingara Advocate captured lovely shots of the weekend.