The success of the Copeton Freshwater Swim continues to grow, with the organising committee deeming the 2016 event, held at Copeton Dam on Saturday, an outstanding success.

A total of 128 people took part, with entries coming from south of Sydney to above the Sunshine Coast. Competitors ranged in age from 8 to 74 years.

The winners of the 2.5km event, sponsored by Inverell Shire, were 13 year old Gracie Pitkin from Grafton, and Richard Goddard from Dorrigo.

Grace was also the female winner of the 600 metre event, sponsored by McDonalds.

Male and female winners of the Under 14s were Luke Deasey and Gracie Pitkin, and in the open, Richard Goddard and Trish Reid from Tomagog.

A spokesperson for the event said it was a ‘fabulous day’, the water temperature was good, and a sprinkle of rain the night before settled the dust.

The event, marketed as ‘the swim with altitude’ attracts strong support from competitors, sponsors and volunteers who assist with the smooth running of the swim.

The committee, headed by Inverell East Rotary Club, is thankful to Print Anything and the Copeton Inland Water Park for their assistance. 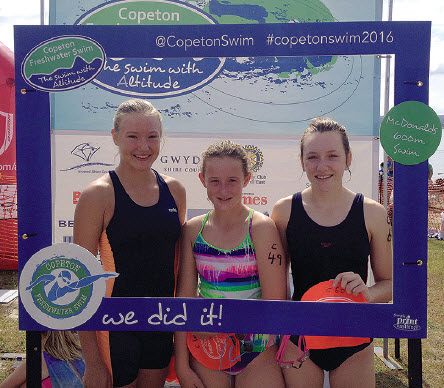 The girls all agreed that they had an awesome time and hope to return next year to compete.

Gordon Clem also competed in the 2.5km division and placed 17th out of 37 competitors.