Another successful Veterans Week of Golf

Many of the 63 golfers who took part in the highly successful Bingara Veterans’ Week of Golf last week have gone on to compete in a similar event in Inverell this week. 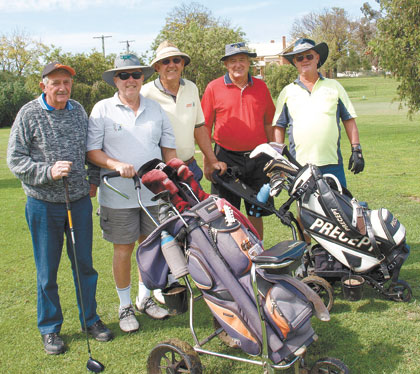 On Monday, September 27, the week commenced at Bingara. Men’s winner was Ross Bartlett, 39 points and Runner up was Keith Pedron. Ladies’ winner was Julie Foster from Taree and Thel Bartlett was runner up from Raymond Terrace.

Tuesday, September 28, played at Barraba saw Michael Sykes of Manilla win and Allen Cullen, Foster-Tuncurry as the runner up. Julie Foster and Thel Bartlett continued from Monday as winner and runner up.

Wednesday was a rest day with a bus trip leaving from Bingara, round Copeton Dam where we had lunch and a hit of golf.

Afternoon tea was at New England Estate wines, Delungra and then finished back home.

The Mac Dufty Shield (named in honour of the instigator of the Veteran’s week of Golf) was awarded to Thel Bartlett for the ladies and Allen Cullen for the men.
Ross Bartlett won the NSW Bill Poole shield and Jenny Johnston was the “Feed the Cod” winner, (for the most balls hit into the river).

The golfers concluded the week of golf with a dinner at the Sporting Club on Friday night.

The Veterans’ committee would like to thank all those that helped with the  morning tea.