One of the highlights of the morning was the fly over of Bingara by the C17 that Robyn Ritchie of the Bingara RSL Sub Branch arranged.

Some of the onlookers said it brought tears to their eyes.The C-17 allows the Royal Australia Air Force to rapidly deploy troops, supplies, combat vehicles, heavy equipment and helicopters anywhere in the world. 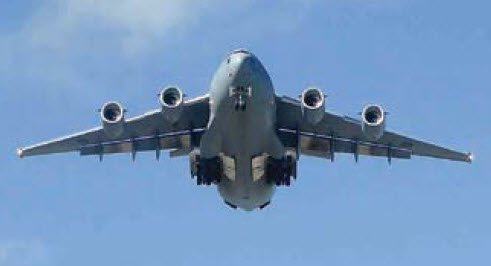 The C-17 is a high-wing four engine heavy transport. It has three times the carrying capacity of the C-130 Hercules allowing Australia to rapidly deploy troops, supplies, combat vehicles, heavy equipment and helicopters anywhere in the world. It can carry up to 77 tonnes, ranging from an Abrams Tank, four Bushmaster vehicles, three Black Hawk Helicopters or be converted to an aero-medical evacuation capacity.

Numbers of the march were up on last year according to onlookers.

Kath Herringe said that there were 107 breakfasts served at the RSL Club after the dawn service.