Developer of an app-based platform which is guiding visitors around Warialda, Myall Creek and Uralla, Hamish Sewell from the Story Project, was in Bingara on Monday, working on more local stories.

The Soundtrails app launched in August 2014 with three soundtrails in the New England and North West, and another three in the offing. 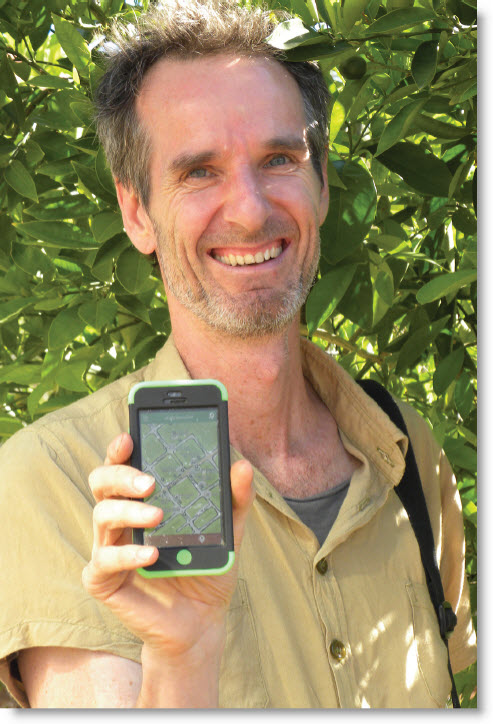 Hamish Sewell from the Story Project with the Soundtrails app.

Hamish said there are two stories in Bingara which he is working on. One is the story about the memorial orange trees, the soldiers, war diaries, soldier settlers, the children who act as ‘orange police’ to protect the trees, and personal accounts of people in the community, and stories about the wars. Hamish is hoping to use archival audio and video in the stories.

The second group of stories are those that generally connect with the community and place.

The Roxy Theatre will of course be featured, along with other ‘landmark’ buildings in the town. But it is the people with stories to tell which interest Hamish the most.  Already Hamish has spoken to Jean O’Brien, John Wearne, Ron Irlam and Kath Bleechmore.

The app provides people with a fun experience, which, according to Hamish, is even better “when you hear unexpected things”.

“You (Bingara, Warialda and Uralla) are probably the first in the world to have this facility,” Hamish said.

“The idea of using GPS is new, as soon as you are in that soundfield, it kicks in. You could do 100 sound trails under one single app. We have created a framework for multiple sound trails.”

Hamish has also been talking with the National Film and Sound Archives about showcasing this, and in turn, Soundtrails accessing archives to build even more stories.

“Queensland University of Technology Creative Industries is seeing this as a really groundbreaking model,” he said.

How it works
The Soundtrails app works on iPhones, iOS and Android devices. Users walk around an area at leisure, tracking their whereabouts in relation to the bed of audio stories on a virtual map.

Stories automatically fade in or fade out depending on the movement of the user in relation to the (GPS) location of the stories. (Older devices may vary in their capacity to follow stories via GPS, in which case they can follow the walk manually).

Also, users may listen to stories off location either through their mobile device (in manual mode) or via the Soundtrails website www.soundtrails.com.au.

The Myall Creek app features a mixture of local and professional voices telling the stories behind the 1839 massacre, and the efforts to bring the perpetrators to justice.