Community members, Gwydir Shire staff and Councillors gathered recently as four residents were officially made Australian citizens. May and Klarissa Ventura from the Republic of the Philippines, Leo Alabed Allat from Jordan and Margareta Ivanoff from Sweden were each presented with Citizenship certificates by Mayor John Coulton in front of friends and family at Council’s monthly meeting.

Cr. Coulton told the crowd that the ceremony was of great significance, as the Gwydir community would not usually see so many people acquiring citizenship at once. “It is very rare to have this many naturalisations in one day, especially four,” he said. “It is great though to see this much support for the wonderful people of our community.”

Citizenship ceremonies are special events. They fulfil requirements under Australian citizenship law, while providing an important opportunity to officially welcome new citizens as full members of the Australian community. They are often a special experience for the new citizen, as well as their host and guests. 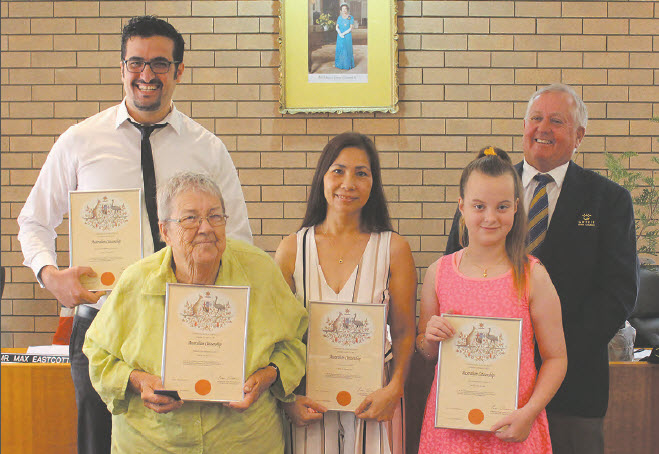 The four new citizens come from varying backgrounds, but all share a love of living within the community and involving themselves in local businesses and networks. Following the formalities of the ceremony, the new citizens and their guests enjoyed a morning tea and a chance to meet one another. 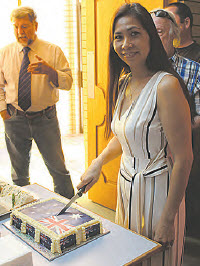 The highlight for many was the wonderful Australian flag cake baked and decorated by Warialda baker Beck Rose. The new citizens of Gwydir each received a native pot plant, kindly donated by Northern Slopes Landcare.

May and Klarissa came to Australia in 2012 and have embraced the local life, with May working as an Assistant in Nursing/Carer at Naroo Aged Care Facility and Touriandi Lodge in Bingara. Klarissa is currently in Year 5 at Warialda Public School. May also has a 22 year old son living in Warialda who has recently been approved to become an Australian citizen.

Leo also came to Australia in 2012 and initially settled at the Gold Coast before moving to Warialda in 2014. Leo currently manages Carlos IGA in Warialda and hopes to one day sponsor his parents to make the move from Jordan to Australia.

Margaretta travelled to Australia on a migrant boat in 1970, initially landing in Victoria before settling in Sydney. Margaretta and her husband moved to Warialda in 1994 after her husband decided he would like to be a farmer. Margaretta has two daughters and a son living in Sydney, and six grandchildren ranging from eight years old to 21.

Each of the new citizens had a common love of the safe and friendly communities of which they have decided to live. Leo expressed his citizenship as one of the biggest accomplishments he has had to date and felt that it marked a moment of love, peace and life opportunity for Leo and his family.