Thelma Jane (Nan or Babe as she is commonly known) O’Neile celebrated her one hundreth birthday on Friday February 25 at Touriandi Lodge. 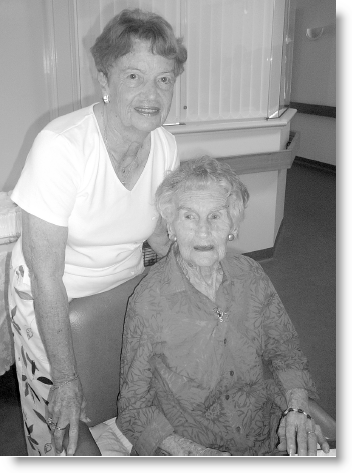 Mrs. Babe O’Neile, with her daughter, Phyllis Woolaston, at her birthday.

Babe enjoyed a huge celebration with many people including her daughter Phyllis and son-in-law Stan Woolaston who travelled from Taree for the occasion. Other people came from Sydney, Brisbane, America, Lord Howe Island, Gold Coast and Taree.

“All these people were there for my birthday,” Babe said.  “People I didn’t even know.”

One of seven children, Babe (née White) has spent her entire life in the Bingara area with childhood memories of playing tennis on weekends with her brothers, against the Munro children of her generation.

“I could run like a deer in those days,” she said.  “Of course, these days I can’t play tennis because I have a bad shoulder.”

Mrs. O’Neile grew up, attending social activities such as dances, picnics and singing around the piano.

“I’ve had  a pretty good life,” Mrs. O’Neile said. “Bingara is a beautiful place, there is nowhere else like it”.

While she has lived through many changes with the world, all in all Mrs. O’Neile isn’t worried by change.  “I just didn’t take any notice, you just go along with it, and take every day as it comes,” she said.

“Yes, there were a lot of changes over the years in Bingara, with new buildings, clubs, shops but you don’t really notice the changes that much.”

Mrs. O’Neile takes a keen interest in events, and still subscribes to the Bingara Advocate.

Asked how she gained the nickname ‘Babe’, she said “I used to be able to sing once. When I was younger I would always sing to my Uncle and he would always call me ‘Babe O’Neile’. As I grew up I just kept getting called Aunty Babe, every one calls me that now,” Mrs. O’Neile said.

Babe O’Neile’s room at Touriandi, which has been home since 2009, is crowded with photographs that tell the story of her life, baby photos, wedding photos, grandchildren and great-grand children. Over the decades Babe has enjoyed the ups of life and suffered the downs but her spirit is still strong and very alive.

She may be 100 years old but at heart, Babe O’Neile is still the young Bingara girl who has a love for tennis and can run like a deer.