“Brilliant!” “Amazing!” “As good as any professional show I have seen in the city!”  “ A Triumph!”  These were some of the comments from ‘first night’ patrons at the North West Theatre Company’s adaptation of Noel Coward’s classic comedy ‘Blithe Spirit’ on Saturday May 7. 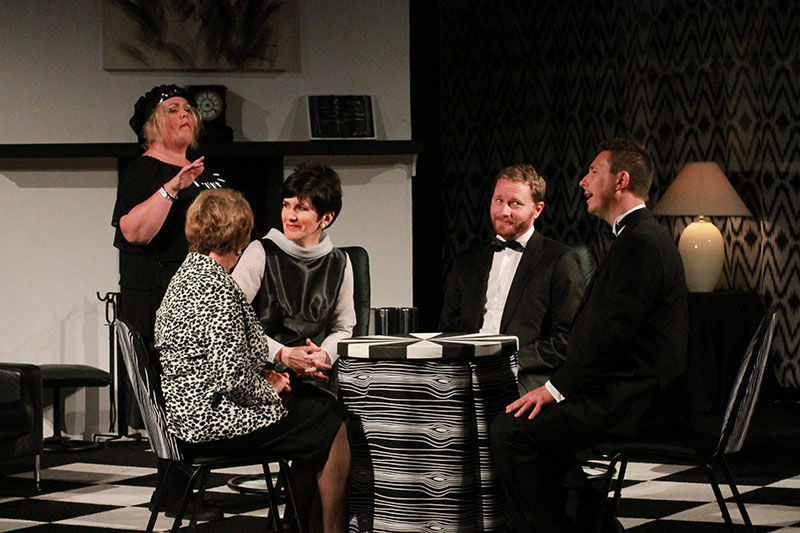 Once again the NWTC has raised the bar and presented a show that is sassy, slick and spooky. At ‘lights up’ the stage is set as an expensive and chic English country home. It is 1965, the Beatles are topping the charts, and ‘dabbling in the occult’, is part of the ‘Swinging Sixties Scene’.

Wealthy award winning author, Charles Condomine (Benjamin Daley) is seeking ideas for his new book “Ghost of a Chance”. He has invited clairvoyant and medium Madame Arcati (Nedine Young), newly arrived in the village from London, to come to dinner and to conduct a séance. He wants to learn some of her ‘tricks of the trade’ for a ‘murderous medium’ planned for in his story.

Friends of Charles and his wife Ruth (Tanya Heaton) are Dr George Bradman (Peter Caddey) and Mrs Violet Bradman (Johnette Walker). They too have been invited to make up the dinner party. All is going well until, unknown to them all, and invisible to all but Charles, the ghost of his first wife Elvira (Grace Smyth) appears.

Life in the Condomine household is thrown into chaos. Edith the Maid (Rebekah Turner) Cook the Cook (Robyn Phillips) and the local Vicar (Henry Martin) and his wife Victoria (Frances Bilsborough) are all dragged into the turmoil, as Madame Arcati tries to undo the damage done.

The set for ‘Blithe Spirit’ (constructed by Paul Moulton, Geoff Leech and Lou Faint) is just magical and has a life of its own. Lights and Sound (by Martin Hansford) dazzle the eyes and ears, and the costumes and make-up (by Susan Hutton and Nikki Galvin) put the final polish on this wonderful production. The performance flowed seamlessly thanks to Stage Manager Carmen Southwell.

Producer/Director Rick Hutton said he was ‘delighted to have such a sweet suite of talent’ at his disposal. He has blended it all to get just the right balance of comedy, drama and farce.

‘Blithe Spirit’ will have three more shows. On the evening of Friday 13th, will be the “Freaky Friday Performance” with guests invited to wear their gear. Two 2pm Matinee performances on Saturday May 14 and Sunday May 15 end the season.