Production is well underway for the musical production of Big River Dreaming to be staged at the Roxy Theatre in August. The musical is sung through with the songs and dances telling stories of life on the banks of the Big River known as the Koomar to the Gamilaraay people and the Gwydir after explorer Allan Cunningham.

In the musical, the river is the only “character” that appears throughout the show. It is a symbol of hope, of enterprise and of change, and the audience will be invited to see themselves as part of the river, watching the passing of people and their stories on its banks.

Another natural feature that appears as a “character” in the show is the Warialda Rainbow. It features as a “wish upon” symbol, a rare and beautiful phenomenon that shows that dreams can be shared, and that cares and troubles can be made less important when put into perspective. 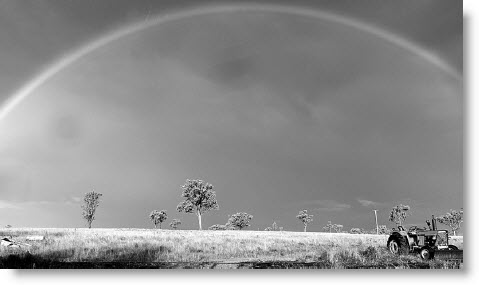 A competition has been held in Warialda for community members to submit their photographs of a Warialda Rainbow. One entry, from WHS Year 12 student Ashleigh Cleal, is seen above.

Gwydir residents are invited to submit any digital photos that they have of the Big River. A family ticket to the show will be awarded to the best picture selected, and it will be used in the production. Please email entries to the Director, Rick Hutton at richard.hutton1@det.nsw.gov.au.

The students of Bingara Central School, Warialda High School and Bingara Pre-school will make up most of the cast and the 23 piece orchestra. Tickets to Big River Dreaming will be available later in May through the Bingara Tourist Office.