All of Gwydir Shire is talking about the up-coming world premiere of the musical “Big River Dreaming”. Rarely does a community get to tell its story on stage and even more rarely in the form of a musical.

Friday August 10 will be the world premiere performance of the musical that shows the story of a river, the BIG RIVER, today known as the Gwydir, but which the koori people of the gamilaraay nation knew as the Koomar. For ten thousand years or more they lived upon the shore of the big river. In 1827 explorer Allan Cunningham discovered the same crossing that the gamilaraay had known, and started the period of white settlement. Cattle and sheep were followed by the discovery of gold and diamonds. Two world wars and periods of growth and depression are depicted in the show. 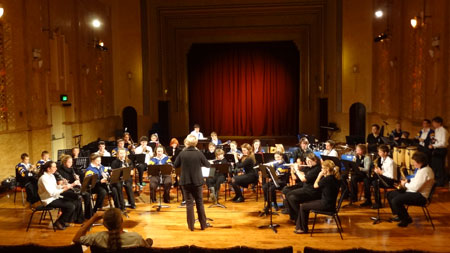 Some of the Gwydir Band rehearsing for Big River Dreaming

In the musical the audience is invited to see itself as being the river, and the stage to be one spot on its banks. The name of that spot is Bingara which means shallow river crossing. The musical tells stories of the people who have lived at this place from well before written history through to the present day. The cast of more than 150 singers and dancers range from pre-schoolers to senior citizens of the Gwydir community.

The 24 piece Gwydir Band under the baton of musical director Robyn Conway play through the show with 18 original songs composed by the show’s Director, Rick Hutton. The musical arrangements of Newcastle’s Daniel “Muz” Murray will delight the audience and linger long in their heads and hearts, just as they do for the performers.