The long-anticipated opening of the $2.4million Bingara Pool Precinct was welcomed on Saturday morning with an official ceremony before a group of local children joined Northern Tablelands MP for the first swim in the pool.

Of the guests at the official opening was Mr Wes Ball and Mr John Lennan. Mr Ball was part of the team who built the original pool in 1964, and Mr Lennan taught children to swim in the very original pool constructed in the Gwydir River.

From little things big things grow, as demonstrated by what was to come after the initial request from Bingara Swimming Club to heat the local pool.  A bid for funding under Stronger Country Communities Round one was granted, however subsequent investigations determined that leaking from the existing pool was unable to be rectified. At this time Council resolved to find the funds for a solution.

“This is the result of a long-term vision. At the beginning of all this I didn’t believe that we’d be able to do it, or that we could afford to do it,” said Gwydir Shire Council Mayor, John Coulton. “The limit to what you can have is your imagination. I have been told, if you want something bad enough, the money will turn up somewhere, and that’s how this worked.”

To bring the pool to reality, in addition to Council’s contribution funding was obtained from six different grants including from the NSW Government through its Restart NSW (Big River Dreaming), Stronger Country Communities, and State Drought Stimulus programs. Federal funding came from Aus Sport, Drought Assistance Round 2 and Local Roads and Community Infrastructure programs.

Northern Tablelands MP Adam Marshall praised Council’s efforts to ensure the community had a facility that would benefit them for years to come. “The work that this council does is absolutely outstanding, bar none.

This council, if it gets a grant, I don’t know how you do it but you are able to eke extra out of it every single time, he said. The complex now comprises of a 25 metre pool suitable to competition swimming, splash pool park with gradual entry and water features, new air-conditioned kiosk with activity room, renovated amenities, UV water filtration systems which will ensure water quality at a level equal to any Olympic facility.

The Bingara Lions Club and the Lions Club NSW/ACT Public Healthcare Foundation have generously donated a water wheelchair which can be used by children and adults in both the 25 metre pool and splash program pool.

From the start to finish, 54 Council employees were directly involved in the project. Twelve contractors and retailers from within the Shire were engaged, and another 20 from across the region. Even more were involved from across NSW, Western Australia and Queensland and of note was the pool contractor Beau Corp, who was the successful tender respondent.

Special mention was mad e on the morning to the companies involved and credited the cohesive manner in which all parties involved were able to work together to make the project such a success, with the successful tender being the only one which ensured the site’s oak tree was retained.

The weekend saw over 400 patrons enjoy the pool. Entry of these were staggered to comply with NSW Government COVID-19 guidelines. If feedback from the community is anything to go by the pool will be well utilised into the future with many children expressing over the the weekend that they were unable to believe that this is now in their backyard. 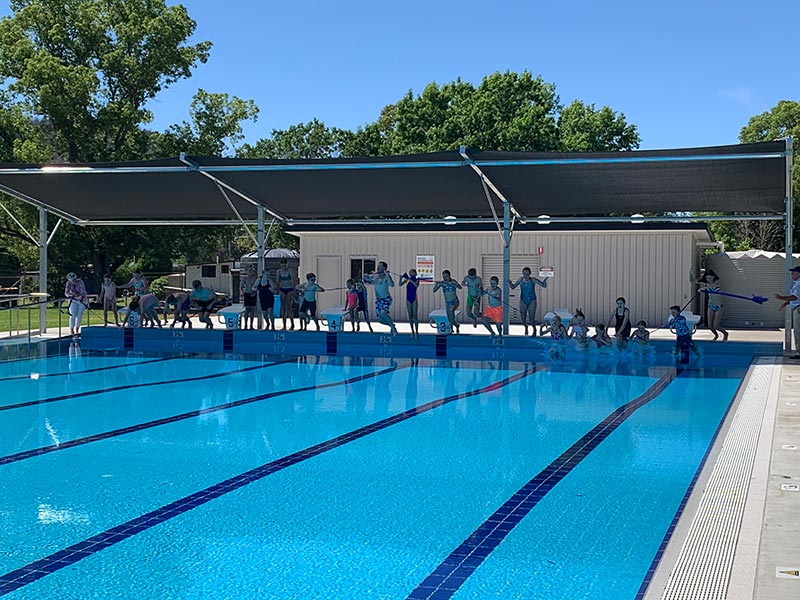