North West Theatre Company has announced plans for their next production – a one-act courtroom drama with a distinct twist.

Since the success of “Blithe Spirit” in May of this year, speculation has run high in the community about what NWTC had planned next, and this has been reflected in a consistent number of questions to that effect. So we can say to theatre lovers throughout the region – your wait is over!

Rehearsals are in full swing, and the cast of 15 are learning plenty about laying down the law!

“You, the Jury”, penned by playwright Anne Martens, will be performed through four performances during November – evening shows on Saturday 12th and Saturday 19th November at 7.30pm, and afternoon matinees on Sunday, 13th and Sunday, 20th November beginning at 2.30pm. 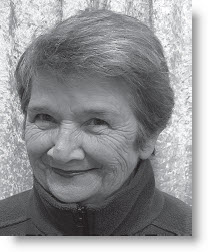 “You, the Jury” tells the story of the courtroom trial of Bill Hughes (Saul Standerwick), who is accused by his employer – television hostess Clarissa Townley (Wendy Wearne) of the theft of a large sum of money from her home. Other leading roles are played by NWTC stalwarts Lee Loudon (Prosecution Counsel Mrs Slater) and Linda McDouall (Defence Attorney Ms. Drexel).

And the Judge? Wait for it……… Judge Vance is portrayed by none other than Gwydir Shire General Manager Max Eastcott. Max hasn’t appeared in a NWTC production for a few years now, and his appearance is a coup for Director Christine Fry (pictured opposite).

Others in the cast of 15 include Rick Hutton (Court Clerk and Narrator), Tanya Heaton, Rebekah Turner, Sally Olive, Judy Adams, John Wearne, Frances Bilsborough and Henry Martin (prosecution and defense witnesses) and Gail List and Robyn Phillips as Court officials. “You, the Jury” sees the directional debut of Christine Fry. Chris has been active in North West Theatre Company activities in recent years with roles in “The Curious Savage” (2014), “Murdered to Death”, (2015) and as Stage Manager of “Lipstick Dreams” (2015).

NWTC will again enjoy the services of Martin Hansford for sound and lighting. Martin has remained as Technical Director for NWTC, despite relocating to Armidale.

The company again has the formidable talents of people backstage and in the front of the house to make a complete production.

Two things add particular value to attending “You, the Jury”.

Firstly, the show is supported with afternoon tea (matinees) and supper (evening performances).  These will be held at the conclusion of the performances in the Roxy Café, and catered for by four of our leading community organizations.

The second thing setting this particular production apart lies in a surprise for the audience. And you will simply have to wait and see what this is!