Bingara’s Australia Day celebrations will begin again this year at 8.00 am with the annual Community Breakfast in the grounds of the Bingara and District Historical Society.

“There will be the usual community breakfast, cooked by the Bingara Lions and we encourage everyone to come on down to the Bingara Historical Society Museum to be a part of the morning’s breakfast and Local Citizen of the Year Award Ceremony. It’s one of the best days of the year for the community to come together as one and remember why we’re fans of this great nation,” said Cr. Catherine Egan.

A prayer to the Nation will be delivered prior to Chairperson of the Bingara Special Events Committee and Deputy Mayor Cr Catherine Egan officially welcoming visitors and guests to the celebrations.

At the conclusion of the award ceremony Cr Egan will present Jeremy with his Australia Day ambassadors pin plus a gift from the community.

Following a break for lunch the day’s activities will move, at around 4.00 pm to the Bingara Sporting Club for afternoon of sporting events.

Jeremy Rolleston is a two-time Winter Olympian, an Australian representative in two different sports (bobsleigh and rugby), a successful investment banker, author of ‘A Life that Counts’ and a proud Australia Day Ambassador.

Australia Day Ambassador Jeremy regards representing his country as the ultimate honour and has represented his country internationally in two sports – rugby and bobsleigh. In 2006 at the XX Winter Olympic Games in Torino, Italy Jeremy piloted Australia’s 2-man bobsleigh to the equal best-ever Australian result. Then at the most recent XXI Winter Olympics in Vancouver 2010, the Australian public shared the heartbreaking crash that Jeremy was involved in on the same track that had already tragically claimed the life of one Olympic athlete one week earlier. In what was a devastating situation Jeremy exemplified the honour, dignity and sportsmanship we look for in Olympians, not just when they win but when everything goes wrong.

During his rugby days, Jeremy played in numerous representative teams including the Australian Legends team, the Australian Universities team and the Australian B (Legends) sevens side. He also played professionally for Italian side Rovigo in the European Shield and Italian Championships before retiring to pursue bobsleigh.

Off the field and away from the ice, Jeremy is as passionate about life as he is his sport. Throughout his sporting career he has maintained a successful corporate career in banking and finance. Most recently he was General Manager – Institutional Business at Perpetual Investments and previous to that was an Executive Director at Goldman Sachs JB Were investment bank.

He is on the Board of the NSW Olympians Club, the Australian Coaching Institute and is proud to be an Ambassador for the Global Poverty Project, as well as Australia Day.

In 2011 he released his first book ‘A Life That Counts’ to great reviews. In fact the book includes contributions from ten other famous and inspiring Australians including the likes of Gai Waterhouse, Dick Smith, Jessica Watson, Louise Sauvage, James Tomkins, Matt Shirvington, and Lydia Lassila and so on.

Several members of Jeremy’s family are also travelling to Bingara for the celebrations including his wife Satu. 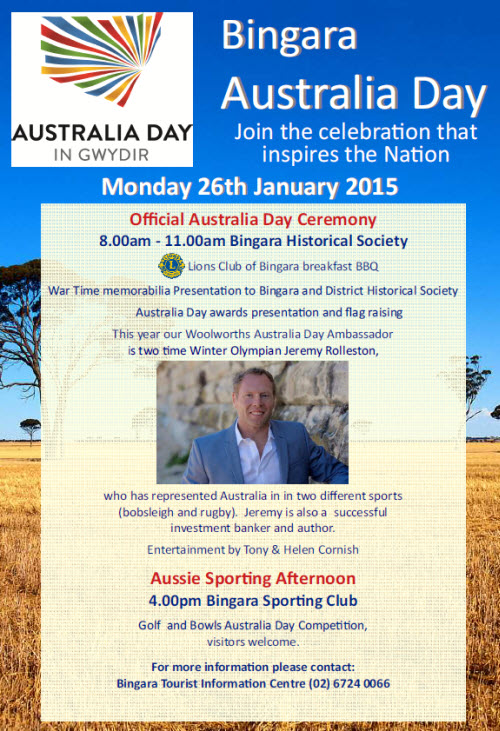