The Gwydir Industry & Education Links Committee held its 13th annual Awards Dinner recently at the Bingara Returned Serviceman Club.  The regard the Bingara and Warialda communities have for the awards can be seen by the 170 people who attended the evening.

This year guest speaker was Trent Owen a full time Air Crewman of the WESTPAC Helicopter Service.  Trent spoke about his journeys path to his career.  He started as a green keeper with a golf club in Tamworth as well as driving for his father’s freight business on days off and weekends.  In Trent’s spare time he volunteered with the Westpac Helicopter Service.

His advice was to have a go at a range of things while being prepared to get experience by volunteering in areas a person is interested in.  Trent also pointed out that there is no set pathway for everybody, and that each person has to follow their path or dream the way that best suits them.

That the awards are in their 13th year is a reflection of such advice.

Looking back over the years has seen individual people of all ages, school aged and mature, be assisted by businesses, community, TAFE, schools and community colleges in the Gwydir Learning Region gain the training and confidence to achieve and push the boundaries to success.

In fact our communities are reaping the benefits as individuals who have gone out into the world are now returning to raise their own families and live in our community.

They are doing this as they feel that their communities of Bingara and Warialda and surrounds gave them a safe and solid start and so they want their young families to have the same opportunities.

Now, to our award winners, congratulation on winning the category that you were nominated in, your dedication to your vocation, loyalty to your business and customers, it is these qualities that can make or break a business. 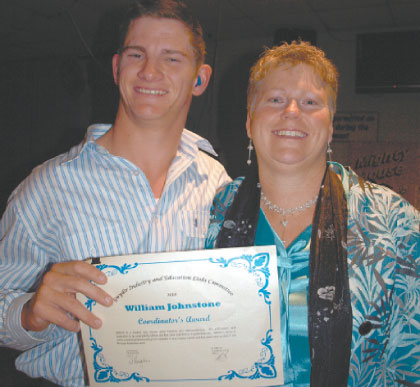 I would like to end with the words that Casey Bowman’s Employer wrote about him and for other employers to think about when they are thinking about putting on a School Based Apprentice or Trainee.

At the beginning of this year Boss Engineering, Inverell, employed Casey as a School Based Apprentice in the trade of “Engineering Fabrication”.  As well as attending Inverell TAFE night classes, Casey is gaining valuable on the job practical experience in his trade.

Casey’s attitude towards his work, willingness to learn and ability to get along with his fellow workers has been excellent.  The principals of Boss Engineering are quite certain that this type of arrangement will be a huge benefit to both employer and employee.