BingaraLatest NewsUncategorizedBingara (and beyond) like that old time rock ‘n’ roll

Bingara (and beyond) like that old time rock ‘n’ roll

(with apologies to Bob Seger)
Already, people are booking to come to the Bingara Orange Festival next year, purely on the strength of the theme. 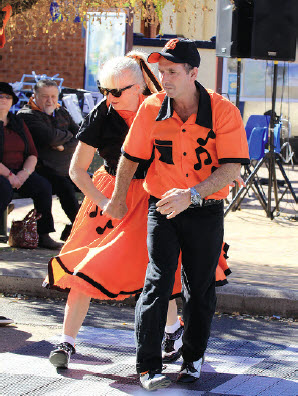 It is undeniable that this year’s Rock n Roll themed Bingara Orange Festival was a resounding success, with record crowds and extensive media coverage including TV, Radio, Facebook and print media.

The coordinating team, The Bingara Special Events Committee, received lots of positive feedback from visiting participants, car clubs and dance groups who loved the festival and believed that it had huge potential for growth.

Some commented that the program offered at this year’s Orange Festival was better than the Trundle Abba festival, and others said that they have been turned off by the big Rock n Roll festivals like Cooli Rocks on the Gold Coast, because they are too big and too expensive to participate in.

They also said that they would love to attend a smaller festival with the same theme and see it as a perfect fit with Bingara’s beautiful buildings and quaint traditions like the Orange picking, which are a reminder of yesteryear.

These comments were music to the committee’s ears.

“For many years the Special Events Committee has felt that if we were to grow the festival, we really needed a theme that was going to attract special interest groups like car clubs, dance groups and nostalgia buffs; this theme did exactly that” said Georgia Standerwick, Marketing and Promotions Team Leader for Gwydir Shire Council.

Following the festival, a poll was undertaken to gauge the community’s support for keeping the same Rock n Roll theme every year. The response was overwhelmingly unanimous.

This decision has been adopted by the committee who are very excited to see the festival grow with this theme.

The Orange Picking will remain as it always has, a joyous celebration of our beautiful town and our freedom which was made possible by the men and women who fought for our country in World War I and World War II.

The committee is currently seeking expressions of interest from individuals or community groups who would like to get involved with the festival in 2018.

For more information, or to register your interest, please contact Georgia Standerwick on 0409 901 540 or gstanderwick@gwydir.nsw.gov.au