Bingara boy Archie Munro will captain the combined GPS Shooting team, after leading The Armidale School to victory in the GPS shooting premiership in Sydney recently. 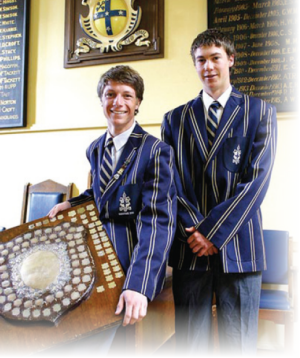 Archie, of ‘Cooringoora’ Bingara is the captain of the TAS rifle team, which braved cold wet and windy conditions to claim victory in all three matches at Hornsby Rifle Range on Tuesday and Wednesday July 20 and 21.

Winning the Rawson Cup, the NRA Shield and the Buchanan Shield entitles TAS to Championship status, for the first time since 1959. The school last won the GPS Premiership in 2008.

Competitors shot at three ranges over the two days from 300m, 500m and 600m for a possible 200 points. All matches involved deliberate shooting for eight man teams. The final match, for the Buchanan Shield, involves a military style ‘snap’ event at 300m.

In Tuesday’s matches, TAS convincingly won the Rawson Cup shot at 500m and 600m, but was only a point ahead of Shore in the NRA Shield over 600m.  On Wednesday in the Buchanan Shield, TAS again had a convincing victory this time ahead of Sydney Boys’ High. Meanwhile in B grade, TAS was placed second behind Shore.

TAS student Arthur Lloyd of Armidale was named King of the Range as the high-scoring shooter of the competition, while another TAS boy, Jordan Rose of Inverell was the best shooter in B-grade.

As a result of their efforts, five TAS boys will make up the GPS combined representative team. The team will be lead and captained by Munro. The others are Arthur Lloyd (17), Toby Crothers (18, Glen Innes), Andrew Murray (16, Bourke), and 14 year old Sam Johnston (Armidale).

TAS Headmaster Murray Guest, who watched the final day of competition, said it was a great victory for the boys.

“The conditions were less than ideal but the focus and skill of the team was evident right through the competition,” he said. “While it is only three years since we last took out the premiership, it is more than 50 years since claiming the championship by winning all three matches, and that is a great achievement for the rifle team and the school.”