The obligatory Australia Day barbeque kicked off celebrations in Bingara on 26 January with Bingara Lions generously catering for the occasion with some of the biggest numbers attending in more recent years.

Attendees heard from special guest, Greg Kachel, who shared his story and offered inspiration on getting involved and remaining involved in the local community. Mr Kachel remained on hand to present the 2022 award nominees and recipients with their awards at the ceremony which was MCed by Linda McDouall. 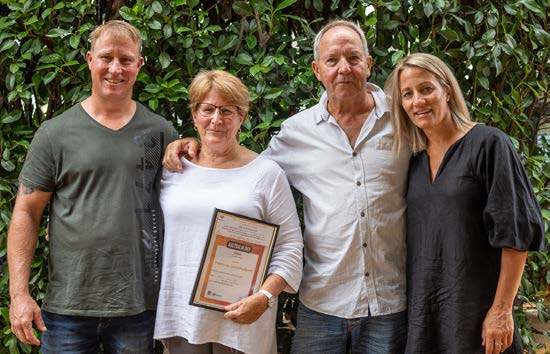 Bingara Citizen of the Year, Gail Phillpott, with family.

Citizen of the Year

Taking out top honours for 2022 was Mrs Gail Phillpott, who was recognized for her commitment to the local community and her tireless work in the town’s library services.

Her dedication and commitment to the residents of the Shire aged 5 – 105 years was highlighted as exemplary and well above and beyond the expectations of her position.

Gail has spent the past two years of challenging COVID-19 conditions adjusting services to ensure all in the community are catered to and cared for.

Reading her citation, Jenny Mead said of Gail, “There are some people in life who clock into their job at 9 o’clock, perform their required duties as prescribed, clock off at 5.00pm on the dot – there is nothing wrong with that.”

“Then there are those who take their role to the next level, putting their heart and soul into what they do, innovating and making changes for the betterment of their endeavours. Miss Gail is one of those people.” 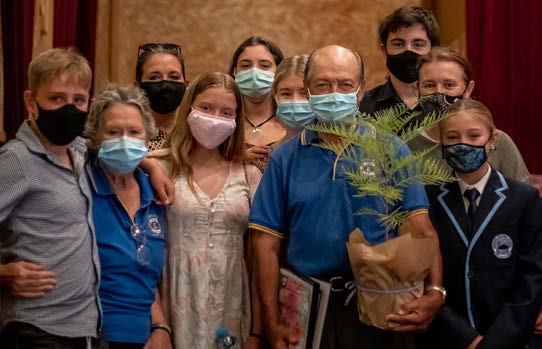 Bingara Volunteer of the Year, Tony Miller, with family.

Volunteer of the Year

Volunteer of the Year, Tony Miller, has been part of Bingara tennis since he was 17 years old. Having retired to Bingara permanently, he has continued to work tirelessly with wife Jan and other members of the Bingara Tennis Committee to ensure the town’s courts are ready for play.

Mr Miller’s passion for the town’s Long Weekend Open Tennis Tournament, an event that has run for 86 years, was evident as he spoke upon receiving his award.

Bingara Op Shop volunteers and Bingara Westpac Rescue Helicopter Support Group also spoke, as nominees in the category, of the value of contributing to the community to which they serve and the value of giving. Bingara Young Citizen of the Year. Will Johnson.

Young Citizen of the Year

Young Citizen of the Year, Will Johnson, and fellow nominee, Karys Smith, were quick to praise and congratulate each other.

Will is the first to acknowledge that he is a product of the Bingara community and has proven himself as most willing to contribute his time, contributing to both Bingara Central School and the wider community.

Will has fulfilled major leadership roles at Bingara Central School for many years. This strong leadership results in a strong school which is also a huge benefit to our small town and culminated in him being elected School Captain in 2021.

Community sport has benefitted from Will’s participation at all levels. He has played a key role in Bingara Minor League as a player, coach, referee and since 2020, has been a committee member of the Club.

In addition, Will has played and been a committee member of Bingara Oz Tag, participated in the Willoughby Exchange program, volunteered at the Bingara Show and engaged in promoting the town and district as a spokesperson in several television interviews.

As Jen read the nominees for the Event of the Year, it was clear for all to see just how many people it takes to make the town work. A line of volunteers stretched from one side of the Roxy Theatre to the other as they lined up to accept their nominations. 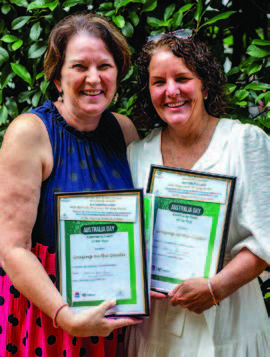 Lenore Kennedy and Tffany Galvin
represented Grazing on Gwydir as the
winning Bingara Event of the Year.

Event of the Year

In the end it was the 2021 Grazing on the Gwydir which took out the award, with co-ordinators Lenore Kennedy and Tiffany Galvin present to collect the certificate and gift of a locally grown tree.

Early in 2021, Bingara Business Support Group were fortunate to have the opportunity to create a main street event, with funding sourced through the NSW Government as part of the Summer Activations Fund.

Working swiftly to provide a safe event during a window of opportunity through COVID-19, Grazing on the Gwydir was an opportunity to showcase local and regional food outlets, live entertainment, and local businesses.

The successful event boosted the morale of the wider community and was a great example of a local community working together for the community.

After accepting the award, Lenore spoke of future plans in which they hope to host an exciting and expanded event in 2023.