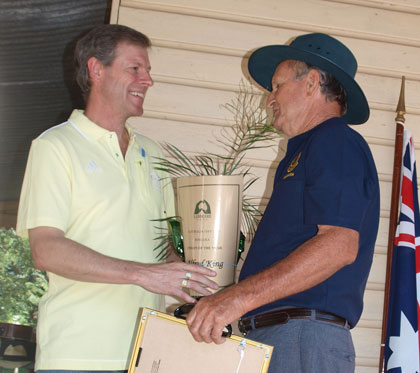 Alf is a highly respected trainer and operator both in the Bingara unit, the North West Region and in the Emergency areas to which he has responded.

Although in his early life, work commitments left little time for family, friends or voluntary work, he still made time and helped his mother Vera and wife, Eileen, raising funds for the Bingara Radiance Club.

Alf has been a member of this organisation since the 1950s and is currently Trustee on the Executive Committee.

His involvement with the Radiance Club alerted Alf and Eileen to the need for an aged care facility and in the 1980s, they both were key members of the committee which raised funds to make Touriandi Lodge a reality.

Alf stayed on the fund raising committee and a Board member for over ten years.  During these years, Alf was a volunteer member of the Bangheet Rural Fire Brigade, and in 2005, was a recipient of the 50 years Long Service Award.

He is a Life member of the Bingara Show society, and up until a few years ago, he was the steward for the Fat lamb and sheep pavilions. Each year he continues to sponsor the Show by donating prizes for section winners in the main pavilion.

Alf became a volunteer member of the Bingara State Emergency Service in 2000, and finally found his niche.

He excelled at all the challenges the SES offered and soon became one of the most qualified and respected members within the organisation. He has volunteered not only in Bingara but in storms and floods  in Sydney, the Hunter, Coffs Harbour, Yallaroi and Moree, to name a few.

In 2007, Alf was selected to be a lead trainer for the conduct of two separate pilot courses to train Indigenous Volunteers.

On Tuesday nights he attends or conducts training for members of the Bingara SES and more recently, the Warialda crew. He regularly trains members from other regions on specialised courses.

On Thursday nights, he conducts the SES Meat raffles at the RSL Club.  Whenever the SES is called to volunteer at a community event, Alf is always there.