Seven enlarged and refurbished primary classrooms at Bingara Central School were opened by Cr. Peter Pankhurst and his wife, Brenda during Education Week.  The building and refurbishment, costing $975,000, was funded by the Federal Government Building the Education Revolution. 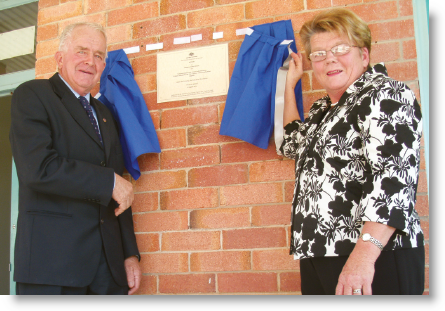 With the government funding, the school has enlarged seven classrooms, built an Covered Outdoor Learning Area, and allowed for improvements such as concrete paths and infrastructure around the school.

The walls along one wing of five classrooms were removed, bringing the corridors into the classrooms. A new verandah gives access to each of the enlarged rooms and increases ventilation.

From Finch street, the two other enlarged classroom can be seen. “We now have seven classrooms, one for each year of primary school, all large modern, well equipped teaching and learning spaces, which include practical activities areas, with the latest in technology, all with interactive whiteboards,” Bingara Central School Principal, Mark Vale, said.

Mr. Vale said that although there have been some cases where money has been not well spent, this is not the case at Bingara. “Our experience is that it was a great investment, with good outcomes with the money spent. “There is nothing that is not used by kids every day”, he said.